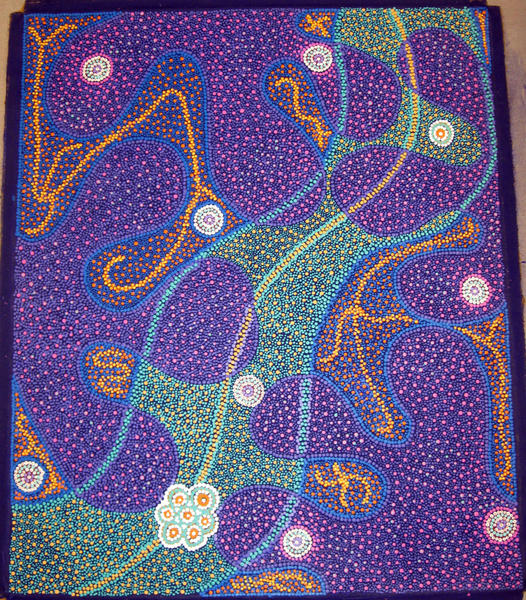 An abstract piece. There are two long, curved, light blue lines running the length between the upper right corner and the lower left corner. Various shapes formed through dark blue, orange, and yellow lines on a blue and green background. Small white circles are placed throughout the piece.

The Napalkarri-warnu Jukurrpa (Seven Sisters Dreaming) depicts the story of the seven ancestral Napaljarri sisters who are found in the night sky today in the cluster of seven stars, found within the constellation Taurus, and more commonly known as the Pleiades. The Pleiades are seven women of the Napaljarri skin group and are often depicted in paintings of this Jukurrpa carrying the Jampijinpa man 'wardilyka' (the bush turkey) who is in love with the Napaljarri-warnu and who represents the Orion's Belt cluster of stars. Jukurra-Jukurra, the morning star, is a Jakamarra man who is also in love with the seven Napaljarri sisters and is often shown chasing them across the night sky. In a final attempt to escape from the Jakamarra the Napaljarri-warnu turned themselves into fire and ascended to the heavens to become stars. The custodians of the Napaljarri-warnu Jukurrpa are Japaljarri/Jungarrayi men and Napaljarri/Nungarrayi women.