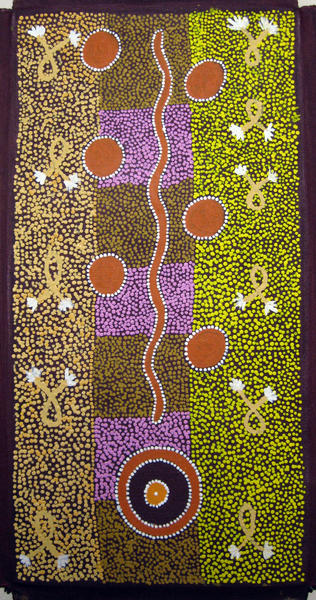 An abstract piece using a beaded pattern. The paint is applied in dots to give off a beaded texture. There are three sections, the one on the left is a tan. The center is a brown with purple squares interchanged. The right side is bright green. There is a curved orange line down the center, there is a black circle beneath it with two orange rings placed over it.

The site depicted in this painting is Puyurru, west of Yuendumu. In the usually dry creek beds are water soakages or naturally occurring wells. Two Jangala men, rainmakers, sang the rain, unleashing a giant storm. It traveled across the country with the lightning striking the land. This storm met up with another storm from Wapurali, to the west, was picked up by a 'kirrkarlan' (brown falcon [Falco berigora]) and carried further west until it dropped the storm at Purlungyanu where it created a giant soakage. At Puyurru the bird dug up a giant snake, 'warnayarra' (the rainbow serpent), and the snake carried water to create the large lake Jillyiumpa, close to an outstation in this country. In many paintings of this, Jukurrpa is curved and straight lines represent the 'ngawarra' (flood waters) running through the landscape. Motifs frequently used to depict this story include small circles representing 'mulju' (water soakages) and short bars depicting 'mangkurdu' (cumulus and stratocumulus clouds).