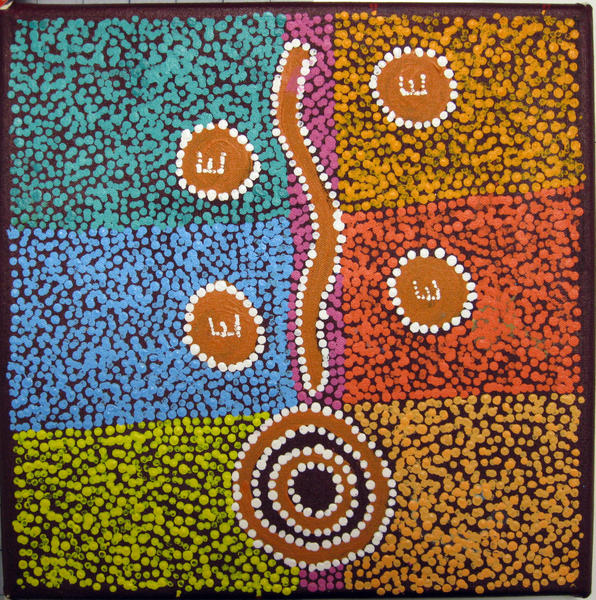 An abstract painting using a beaded pattern. The paint was applied using dots to give the appearance of a beaded texture. There are several large sections of color. The biggest is a blue rectangle in the upper left corner. There are several yellow squares and one orange. In there center there is a curved orange line, it has two orange circles on each side. Below it there is a black circle with two orange and white rings over the top of it.

The Jungunpa Jukurrpa (Spinifex Hopping Mouse [Notornis alexis] Dream) plays an important part in higher-level initiation ceremonies for Japaljarri and Jungarrayi men. Jungunpa make holes everywhere and some form long tunnels. They are nocturnal animals. This Dreaming tells the story of 'jungunpa' ancestors who traveled from Kunajarrayi to Jila (Chilla Well) and then went underground to Junti. At Junti they looked around for food, and after hunting there, went underground again and traveled southwest to Junginyi. Later they returned to Junti. In Warlpiri paintings, traditional iconography is used to represent the Jukurrpa and other elements. Often, concentric circles are used to represent 'mulju' (lakes or flooded areas), and wavy lines portray the 'ngirnti' (tail tracks) of the Jungunpa, flanked by his 'wirliya' (footprints). Larger circles can be used to depict the underground home of the Jungunpa, and arc-shaped figures represent men lying down in the warmth of the late afternoon after hunting.