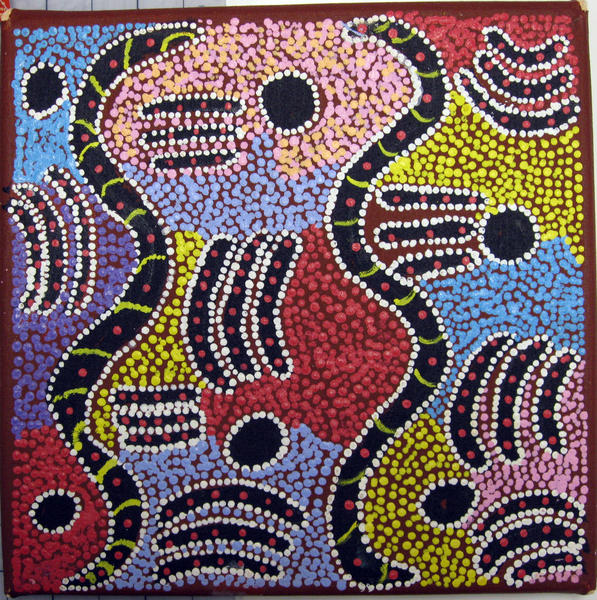 Abstract painting using a beaded pattern. The paint was applied in small dots to represent a beaded texture. There are tow curved vertical lines. There are several sets of lines that consist of three curved lines throughout. There are five black circles through the piece, and several spaces where the color forms sections. Colors range from, yellow, purple, blue, red, and black and gold.

The site depicted in this painting is Pirlinyarnu (Mt. Farewell), which lies about 165 kilometers west of Yuendumu in the Northern Territory. Two Jangala men, rainmakers, sang down the rain, unleashing a giant storm that collided with another storm from Wapurtali. The two storms traveled across the country, from Karlipinpa to near Kintore. A Kirrkarlanji (brown falcon [Falco berigora]) carried the storm further west until it dropped the storm at Pirlinyarnu, forming an enormous Maliri (lake). A "mulju" (marsh) exists in this place today. At Puyurru, the bird dug up a 'warnayarra' (rainbow serpent). The serpent carried water with it to create another large lake. Whenever it rains today hundreds of 'ngapangarlpa' (bush ducks) still flock to Pirlinyarnu. The 'kirda' (custodians) for this Jukurrpa are Jangala/Jampijinpa men and Nangala/Nampijinpa women.