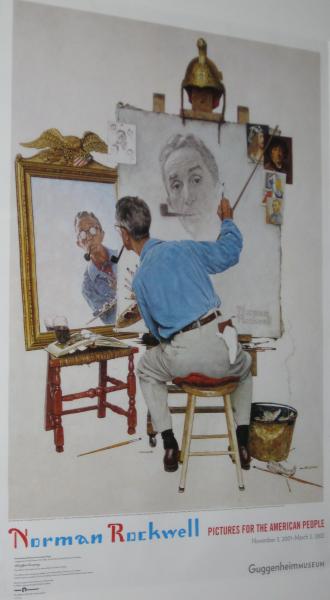 'Pictures For The American People' by Norman Rockwell

Poster depicting a painting of Norman Rockwell painting a self-portrait while looking at himself in a mirror.

Norman Rockwell was a 20th century American painter and illustrator who enjoyed broad appeal during his lifetime. He is recognized for his famous cover illustrations for The Saturday Evening Post magazine that depicted scenes of everyday life in an often idyllic American landscape. Additionally, Rockwell is well-known for his own depiction of the cultural-icon Rosie the Riveter as a response to World War II and the promotion of America's involvement in the conflict. His later work was praised for combating issues of racism prevalent during the Civil Rights Movement that occurred during his later years of life.