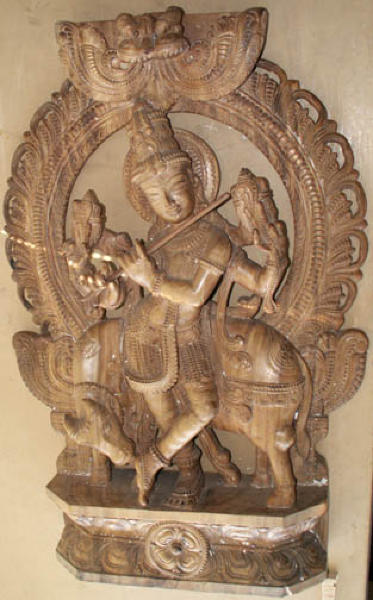 The Art of India ➔ Krishna, the Divine Herdsman (Govinda)

A wall sculpture of a figure holding a flute with two of his four hands. A bull is standing behind the figure. The base has a large floral circle in the center and extends to the top of the figure like a frame.

As a young man, Krishna was a cowherd and is also referred to as Govinda (finder of cows) or Gopala (protector of cows). In Hinduism, cows are considered sacred animals because they are a symbol of abundance, life, and the earth that gives without asking. The cow is considered the mother of humanity as her milk nurtures babies--the role of a human mother. Krishna looked after the cows, and in this context he is referred as the divine herdsman, the eighth incarnation of Vishnu, the preserver of the universe.