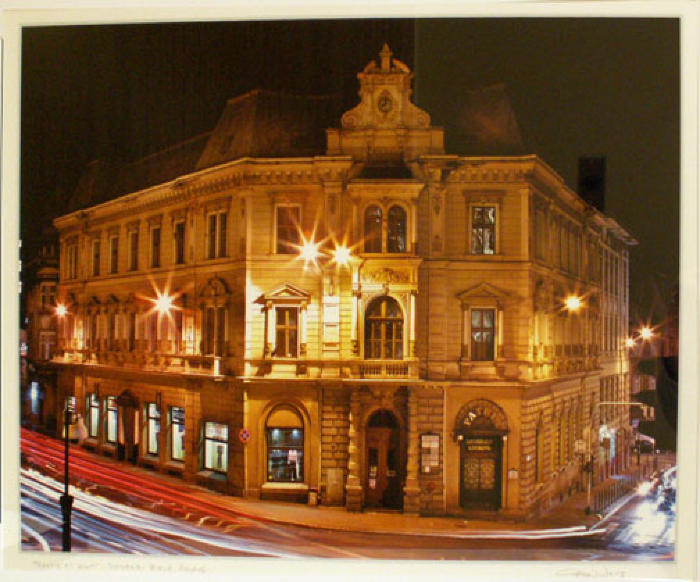 Gift, in part, of the Artist

Large three story building on a corner of the street at night. Streaks of car tail lights and headlights along the bottom. Title written below lower left corner, Signed by artist below right.

"This is the main intersection in Bielsko-Biala, Poland, late at night with just a few cars and buses still moving through town. Bielsko-Biala, Poland." -Dan Watts Alumni GVSU, 1979 Dan has traveled to over 34 countries on corporate, magazine, and personal projects, spending a total of more than three years on the road in the Orient, Europe, Africa, and Latin America. All of these experiences led to his contribution to the new JW Marriott hotel in downtown Grand Rapids, where his photography now decorates the walls of all 330 guest rooms in addition to a large one-man gallery. The work shown in the luxury-class hotel are his extensive photo essays of each of the five Grand Rapids' Sister-Cities on four different continents. This includes the Cherry blossoms and the Fire Festival in Imihachiman, Japan; the architecture of Perugia, Italy; Beilsko-Biala, Poland; people of the Ga District of Ghana in West Africa; and Zapopan, Mexico. At a grand total of 16,855 photographs, this collection marks the single largest collection of Sister-City photography in the world.