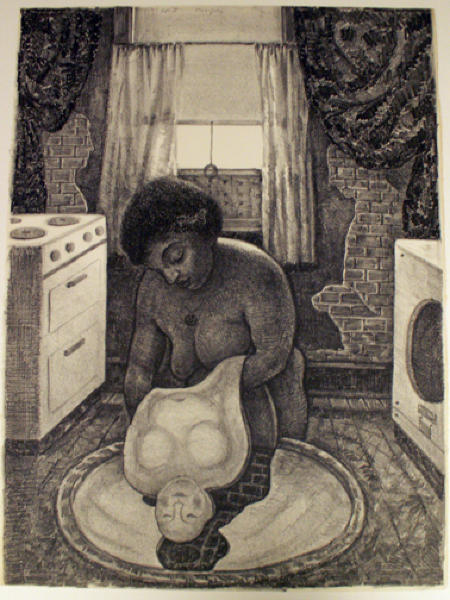 Gift of Ann and David Keister

Black and white lithograph of an interior scene. A black woman holding a cut out shape of a white figure. There is a window in the background. There is also a stove and a washing machine in the room.Front text: "P.P.I", artist signature in top center. Back: Landfall Press stamp in the lower left. SR73359 Symbol embossed in lower right.P.P. I

Born and raised in Chicago, Illinois, artist Seymour Rosofsky emerged in the late 1940’s at the School of the Art Institute of Chicago and quickly became a key figure in the Chicago art scene. Rosofsky was able to attend University through the GI Bill, a government program provided to those who served in World War II. He was a founding member of Monster Roster; a group of Chicago artists, many of whom served in the war, and were known for producing Surrealistic works of art. Members of the Monster Roster were profoundly influenced and mentored by Vera Berdich, a prominent surrealist printmaker who taught at the School of Art Institute of Chicago. Like others in the art group, Rosofsky explored the darker side of Surrealism, an art movement that strove to release the creative potential of the unconscious mind. Rosofsky’s work often presented angst-ridden figures in isolation or uncomfortable situations. Eventually he progressed to create fantastical, observational paintings that examined power, politics, and domestic relationships. Focusing on individual loss and abuse of power in modern life, fraught male vs. female relationships, and the absurdity of war.