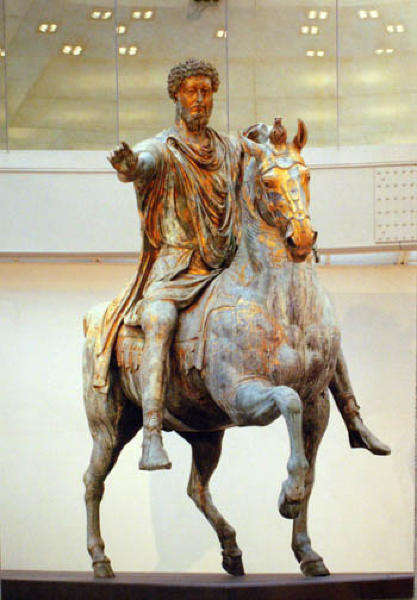 Man (Marcus Aurelius) with a beard on horseback. Partial patina, bronze statue. Figure has one raised arm. Marcus Aurelius is out of proportion compared to the horse.

The Equestrian Statue of Marcus Aurelius is an ancient Roman statue that was originally erected in 175 C.E. It is made of bronze and stands at approximately 3.5 meters tall. Today, the original can be found in the Capitoline Museum of Rome, Italy. The overall theme of the statue is one of power and divine grandeur, noting the larger-than-life size of the emperor and also the position of the body, which is reminiscent of portraits of the famous emperor Augustus. This was a frequently used device in Roman sculpture for suggesting divine passage of power through the generations of emperors. Another note-worthy element is Aurelius' lack of weapons or armor, suggesting that he was thought of more as a bringer of peace than a military hero, which had been his intent.