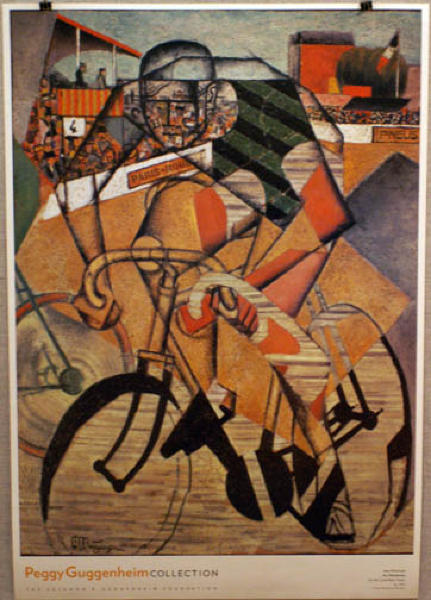 “Au Vélodrome (At the Cycle-Race Track)“ by Jean Metzinger

Partially abstracted/cubist cyclist with a grandstand in the background. Some of the crowd can be seen through the cyclist. Black bicycle. Brown and green geometric shapes in the center. Original artwork dated ca. 1914.

Jean Metzinger was a French painter, theorist, writer, critic and poet born in Nantes, France. His earliest works reflect the Neo-Impressionist style, though later graduated to Fauvist and Cubist styles. He became a principle theorist of the latter, having co-wrote the first major treatise on Cubism, entitled "Du Cubisme", in 1912. Metzinger was also a founding member of the Section d'Or, a collective of French painters, sculptors and critics associated with Cubism and Orphism.This particular artwork, "Au Vélodrome", suggests speed and movement, ideas that are linked to Futurism. The original artwork is in the Peggy Guggenheim Collection (The Solomon R. Guggenheim Foundation).