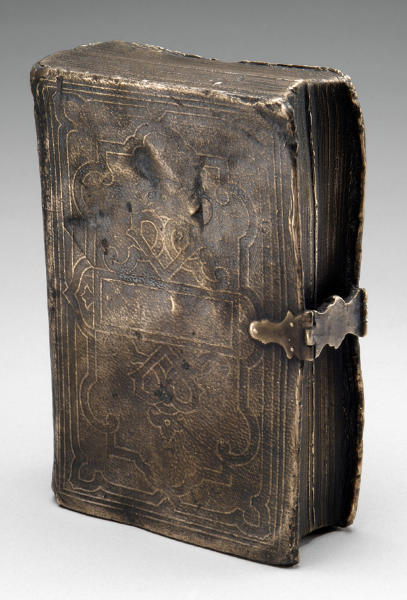 A small, but thick bronze book. It is made to look old and worn. A latch is "holding the book closed" and there are designs in the front and back.

"I became interested in creating this work after attempting to research the possessions that Italian Immigrants brought to America... These objects embody the culture they left behind, but also the hopes and dreams for a future in the New World. Stories and family traditions are built around their possessions, which, in many cases, are the only traces from the first generation... These objects were created in a time when handwork and craft were considered the only mode of construction; they embody the personality of their place and time... I was interested in casting these objects in bronze to archive the originals in their current condition and impede their further deterioration... Many of the possessions brought over from Europe in the early 20th century and the stories that surrounded them have since disappeared. In some cases, oral traditions have allowed some members of the first generation live on and a few of their possessions to survive." - Norwood Viviano