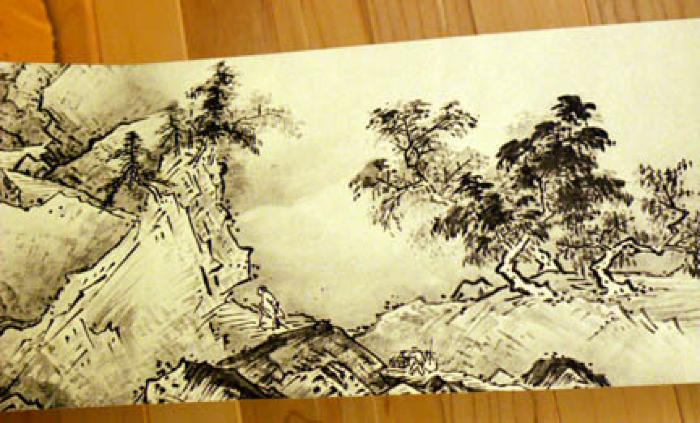 Scroll of Landscapes of the Four Seasons

Scroll with rusty red back and a black box. Painting of towns, trees, valleys, and rocks. The scroll begins with an image of a cliff.

This painting, popularly known as the Longer Landscape Scroll (because there is another smaller sized scroll of landscapes by the same artist), is a representative masterwork of the famous artist Sessh . The inscription by the artist at the end of the scroll, stating â€œPainted by Sessh T y , formerly holder of the first seat at Tine-â€˜tung, in December in the eighteenth year of the Bummei era (A.D. 1486) at the age of sixty-seven,â€ proves that it was done in the period when his skill in art was in its maturity.The scroll illustrates scenes in the changing seasons of the year interwoven with varied aspects of lives of noble and plebeian people. The seasonal sights that evolve, as the scroll is unrolled from right to left, are interestingly rich in variety.The phrase â€œholder of the first seat at Tâ€™ien-tâ€™ungâ€ in the inscription means that he was honored with the top position among the Priests of the Ching-tÃª-ssu Temple at Tâ€™ien-tâ€™ung-shan during his sojourn in Ming China. The term hitsu-ji (â€œreceived the brushâ€) in the same inscription that he used to mean â€œpainted,â€ signifies that he learned the style of his painting from those earlier masters. The reason why he wrote the colophon in such a formal style must have been that this painting was monumental for the artist in some way or other. Around this time his atelier Tenkai Zuga-r at his dwelling Unkoku-an in Yamaguchi Fief was constructed under the patronage of the uchi family, the ruler of Yamaguchi Fief. His itinerant life in religious and artistic pilgrimage came to a temporary end. We might surmise that in this scroll of landscapes he expressed what he was feeling at the time his life-long travels as a Zen (Contemplative Buddhism) priest and a painter. Be that as it may, this scroll is the most laborious work of Sessh and countless a glory of the history of Japanese art.