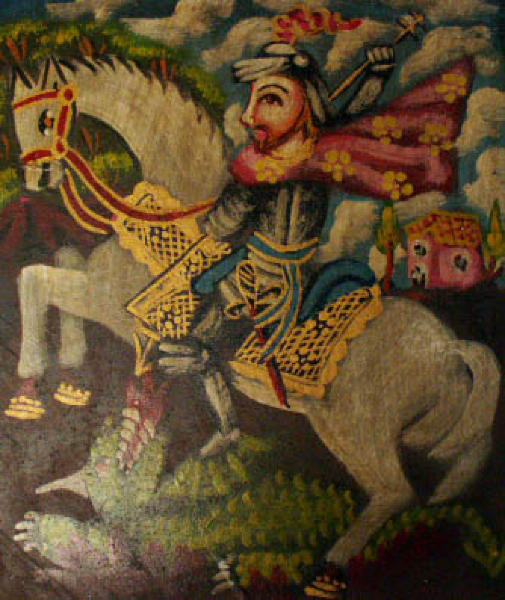 A knight in armor on a horse is slaying a dragon that is below him. The knight is wearing a pink cape with yellow flowers on it. The horse has a golden saddle and hooves.

The Cuzco School's works were originally painted by the indigenous people of Peru who had been taught by such Spanish masters as Loyola. Two traditions existed simultaneously in paintings from Cuzco, that of the indigenous people and that of the Spanish masters influenced by Norse and Late Gothic Art. Native painters gradually moved away from the purely European style and created paintings of unique, extraordinary beauty and great originality by mixing the religious with Andean imagery. This style of painting turned into a popular art form. Some of the most popular representations of this art include The Virgin Mary, The Virgin with Child, The Cuzco Madonna, The Holy Family, and sumptuously-dressed archangels armed as soldiers of heaven such as Saint Michael, Saint Raphael and Saint Gabriel.