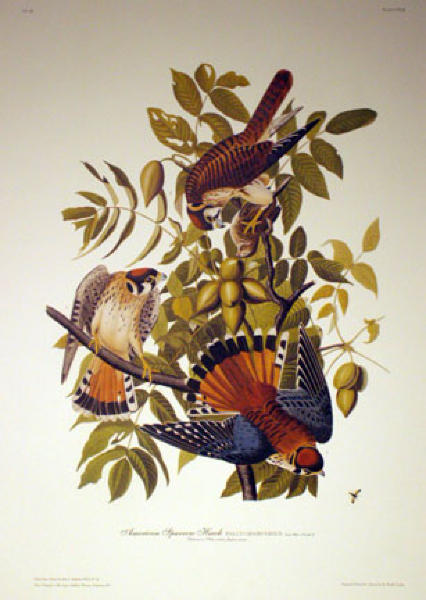 Three hawks in a tree. The one highest has a dead bird in its talons. The one on the bottom is flying towards a bug and the bird in the middle is looking at the one on the top.

John James Audubon was a French-American ornithologist (branch of zoology that concerns the study of birds), a naturalist, a hunter, and a painter. He is most famous for painting, cataloging, and describing birds of North America. He was born in 1785 in Les Cayes, Haiti, in the former colony of Saint-Domingue, on his father's sugar plantation. He immigrated to the U.S. in 1803 to avoid being drafted into the Napoleonic wars. Audubon's influence on Mid-North American ornithology and natural history was substantial, despite some errors in field observations, Audubon's field notes comprised a significant contribution to the understanding of bird anatomy and behavior. Audobon's artwork was said to "represent the new American nation of the United States."