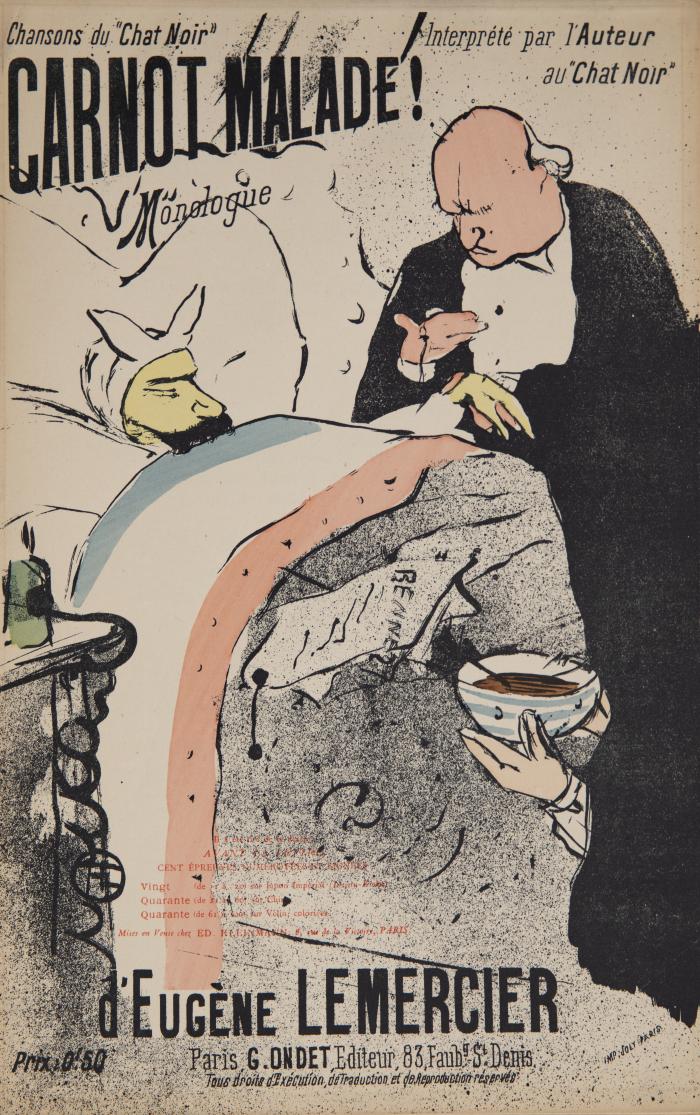 Two-page booklet of monologue. On recto is an image of bald, pink man with white shirt and black jacket on the right side is looking at object in his hand while other hand is holding the hand of yellow man in bed. Yellow man has white bandage wrapped around his head and black beard and unibrow. Bed sheet is blue and pink. Along left side of image is a green bottle sitting on a small, black table. Along the right side of image is a pair of hands holding a blue-striped bowl of brown soup. Title of monologue along the top edge and text on bottom edge in black ink, and small text in the lower portion of image in red ink. Monologue sheet for: Chansons du Chat Noir", 1893. Mounted on mat board. Inside booklet, on both pages, is text in black, while on verso of last page is text inside a gridded format in black ink.

This print, Carnot Malade!, is the first version of a lithograph by Toulouse-Lautrec that formed the cover for a monologue by d'Eugene Lemercier. It was one of a series by Toulouse-Lautrec that served as covers for songs performed at the cabaret Chat Noir, the most famous cabaret artistique of the 1890s. Although Toulouse-Lautrec disliked the haughty atmosphere of the Chat Noir, the mocking tone of Carnot Malade! enabled him to caricature a famous political figure. In the summer of 1893 the Third Republic of France was in its usual series of constitutional crises. Despite riots in Paris, The bankruptycy of the Panama Company, and other turmoil, President Sadi Carnot remained at Marly in the country for treatment of a 'liver ailment.' Toward the end of August he and Madame Carnot canceled a series of engagements. There were rumors of impending surgery and the papers began to speculate on possible successors to Carnot. On 27 August a small Parisian paper, La Triboulet, mocked both the crisis and the president's notorious thinness by stating, 'M. Carnot has a stomach. Until now, no-one had noticed the fact.' In this atmosphere Lemercier performed Carnot Malade! at the Chat Noir. The author/performer suggested that Carnot 'is perhaps a victim of a "parimutuel" at the race track or that he is at odds with the government and coule be cured by putting a sticking plaster on parliament.' The song has the repeated refrain 'If Carnot is ill, it is probably in order to be like the government." In the print an ailing carnot adorned with a hornlike mustard is in bed, with an aristocratic doctor measuring his pulse. At the foot of the bed, broth is proffered to him. These were common motifs for illness, so frequently depicted during this period. Only the document in Carnot's lap is unexplained. 'Benne' is French for a 'hamper' or 'bucket'. The document may have been intended to signify the 'pari-mutuel,' or government business neglected as a result of Carnot's illness. Within the year Carnot was assassinated, ironically enough by a fatal stab wound to his liver. (Jerome B. Zeldis, 204) http://jhmas.oxfordjournals.org/cgi/pdf_extract/XXXII/2/204