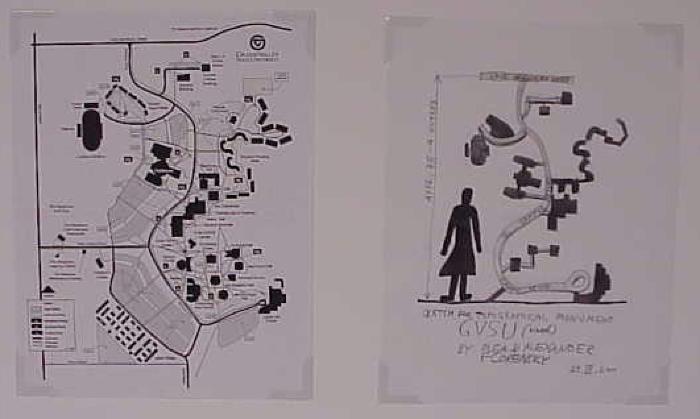 Sketch of the topographical monument in a shape of GVSU campus

Map of campus with Olga and Alexanders interpretation.

The Florenskys visited GVSU in the Fall semester of 2001 in conjunction with their exhibition, Olga & Alexander Florensky: Miscellaneous, presented by the GVSU Art Gallery. During their two week stay in West Michigan, the artists visited and worked with numerous classes on campus and presented a series of public lectures in the community. The Florenskys are well known members of the St. Petersburg avant garde generation of contemporary artists living and working in Russia today. They have degrees from the prestigious Muhkina Academy, where their formal studies began with ceramics. They create both art as individuals and as a husband and wife team, and include painting, drawing, printmaking, textiles, book design, and publishing, as well as, animation and film making. They have received numerous awards and their work can be found in many important Russian and European museums and private collections. GVSU owns a collection of prints, drawings, books and one sculpture in its permanent collection. Their visit at GVSU included a project involving Elona Van Gent's Intermediate Sculpture class, who worked closely with the Florenskys in creating this sculpture. The students, Amie Bajalieh, Sierra Carter, Lisa Orr, along with sculpture major, and gallery assistant, Rachel Rinker, went in search of the right objects and assisted in the creation and assembly of GVSU Topographical Monument, displayed above. This work is the latest in a series of similar maps the Florenskys have created in numerous locations where they have been invited as Visiting Artists, including St. Petersburg, Russia; Vienna, Austria; Helsinki, Finland; Venice, Italy and elsewhere.Henry MatthewsDirector of Galleries and Collections