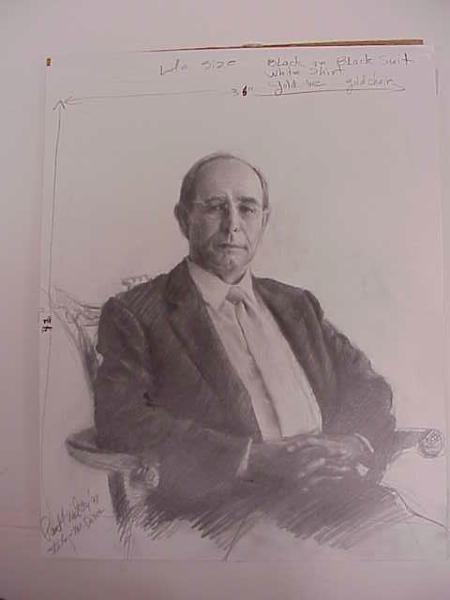 Pencil drawing of Richard DeVos sitting in chair. Study for larger painting with measurements and notes on sides.

Richard DeVos, Sr., (born March 4, 1926, in Grand Rapids, Michigan) is an American billionaire and co-founder of Amway. In 2009, Forbes magazine listed him as the 91st wealthiest person in the United States with an estimated net worth of $4.4 billion. In 2009, Forbes ranked him as the 119th richest person in the world, and at one point he was in the top 10 of wealthiest Americans. DeVos is a heart transplant recipient and is the owner of the National Basketball Association's franchise basketball team, Orlando Magic. He sat on the board of trustees of Northwood University and has sat as president on the Council for National Policy. He also currently serves on the Board of Trustees of the National Constitution Center in Philadelphia, a museum dedicated to the United States Constitution.