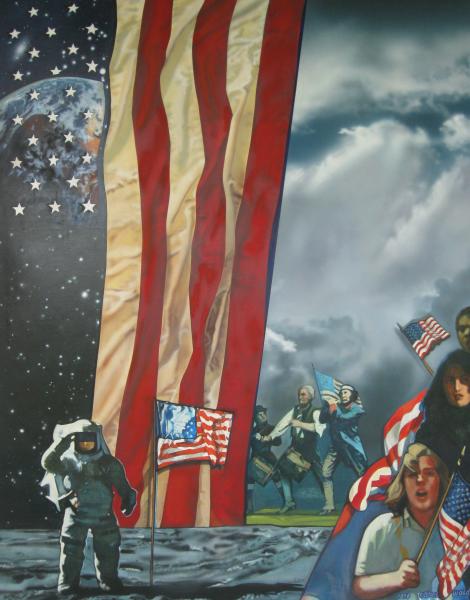 Gift, in part, of the Artist and Hermann Tauchert

Bicentennial portrait, U.S. flags, man on moon. Stripes of a giant US flag run from the top center to bottom center.

"I entered that contest," says Carol Wald, "with a will to win." The artist was referring to a national Bicentennial competition to select someone to paint a companion piece to the "Spirit of '76." That venerable symbol of patriotismâ€”the three colonial men with fife, drum, and flagâ€”was originally painted by Archibald Willard for the 1876 Centennial; a version of it currently hangs in the Cleveland City Hall. "The old 'Spirit' was historic, revolutionary," says Wald. "I felt this was a chance to create something that would be a popular inspirationâ€”a summary of the present and future of America to be seen by everyone... My figures represent forces for change and hope," Wald says, "women, blacks, young people. I'm optimistic about the future: that's the message I tried to get across."-Excerpted from May 17, 1976 issue People Weekly's article on Carol Wald by special permission; Â© 1976, Time Inc.