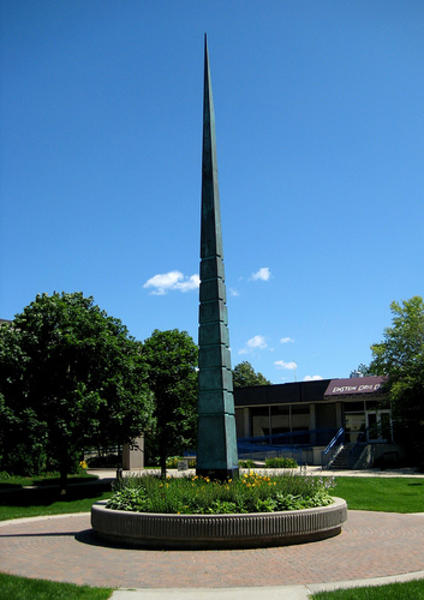 Cast bronze with Marble base

An obelisk is a tall, four-sided, narrow tapering monument which ends in a pyramid-like shape at the top. The original builders of these monuments where the Ancient Egyptians who called them "tekhenu". The Greeks who saw them used the Greek 'obeliskos' to describe them, and this word passed into Latin and ultimately English. Originally obelisks were used to mark Egyptian temple entrances and may had been connected to the astronomical phenomena of the sunrise and sunset: the zodiacal light and sun pillars respectively. For the Egyptians, the obelisks symbolized the sun god, Ra. The Greeks and Romans moved obelisks out of Egypt as well as constructed some of their own. The symbolic nature of these shapes began to shift from religious and astronomical to more of a civic marking. A symbol of power and order. In fact, the Ancient Greek word for obelisk, ὀβελίσκος obeliskos, literally means defense and stability.

An obelisk (UK: /ˈɒbəlɪsk/; US: /ˈɑːbəlɪsk/, from Ancient Greek: ὀβελίσκος obeliskos; diminutive of ὀβελός obelos, "spit, nail, pointed pillar") is a tall, four-sided, narrow tapering monument which ends in a pyramid-like shape or pyramidion at the top. These were originally called "tekhenu" by their builders, the Ancient Egyptians. The Greeks who saw them used the Greek 'obeliskos' to describe them, and this word passed into Latin and ultimately English. Ancient obelisks are monolithic; that is, they consist of a single stone. Apart from its shape, this is the major identifying characteristic of an obelisk, as it necessitates the technological ingenuity required to elevate into vertical position a massive rock weighing hundreds of tonnes.

Though this technological capacity exists today, most modern obelisks are made of several stones; some, like the Washington Monument, are buildings. Technically, these are not real obelisks, but rather obelisk-shaped monuments.

The term stele is generally used for other monumental, upright, inscribed and sculpted stones.