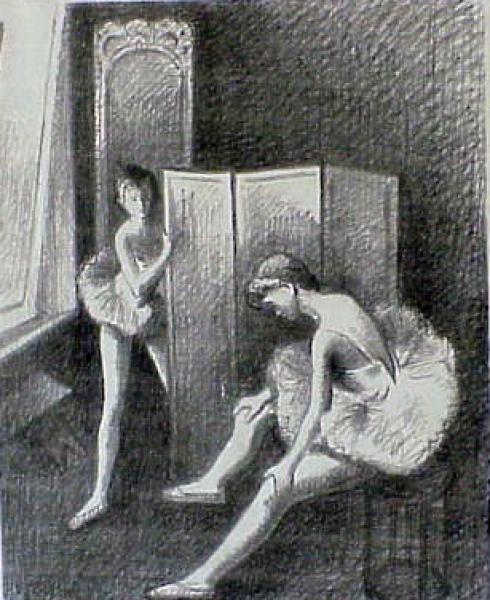 Black and white print of two ballerinas; one sitting fixing stockings, one behind screen.

Moses Soyer, a Russian-American painter and printmaker, was born in Borisoglebsk, Russia on December 25, 1899 to a large, impoverished Jewish family. Mosesâ€™s twin, Raphael Soyer, and younger brother, Isaac, also became successful artists. When the Soyer family was denied its Russian residence permit in 1912, the family immigrated to the United States and eventually settled in Bronx, New York. In the early twentieth century, artists associated with the Ashcan, the school Moses was attending, believed New York should be captured through â€œrealistic and unglamorized representations of everyday life,â€ due to this specific period of tumult and industrialization. After World War II, Soyer continued painting as a realist while other artists began exploring Abstract Expressionism. His subject matter changed however, as he began focusing on the depiction of the female figure, and especially on ballet dancers. His work earned him recognition as a significant figure in the American realist movement.