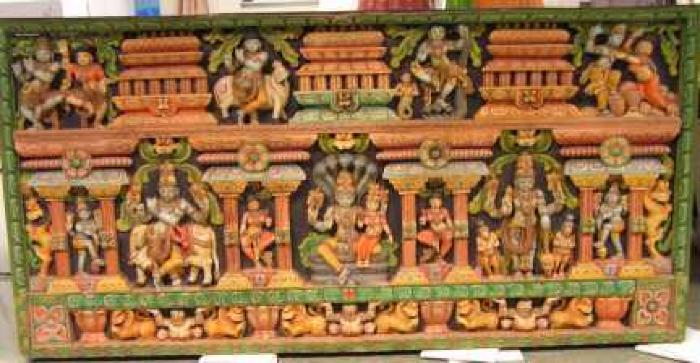 The Art of India ➔ Krishna, the Eighth Incarnation of Vishnu

Krishna is the most beloved of Vishnuâ€™s incarnations. As the story goes, the mythical wish-fulfilling cow, Surabhi, begged Vishnu to come to Earth and rid the world of an evil demon. Vishnu came to Earth in the form of Krishna. Krishna grew up in the house of Nanda, the head of a community of cow-herders in Vrindavana. With his mischievous antics, he played pranks against everyone but also used all his charms and won their hearts. Just as easily he stole butter from unsuspected gopis (milkmaids). He also finished off the demons sent by evil Kaunsa. Hearing his enthralling flue, gopis and the scattered cows would gather around. Radha (Krishnaâ€™s beloved) would hear his frolics with the gopis and get jealous and sad, but Krishna would soon enchant her with his charm, talk, and music. Their love and devotion to one another has become an allegory for the divine love between the gods and those who worship them.