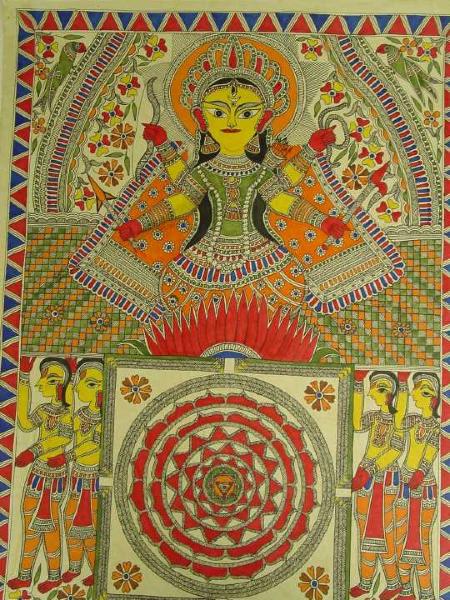 Large central four-armed female figure, and four male figures below with a circular object in the middle separating them in to pairs. Intricately designed.

Durga ("the invincible", or "hard to approach") is a fierce form of the Mother Goddess, Shakti. According to the puranas narratives (400 AD - 1000 AD), a buffalo demon by the name of Mahishasur, was threatening the universe, and the gods could not defeat him. After begging for assistance from Shiva, Shive advised them to release their feminine energy (shakti).Their released shaktis fused together in the blinding light and manifested in the form of a deadly yet beautiful goddess. The gods called her Durga. Riding on a lion, armed with the weapons of all the gods, Durga rode to the mountaintop. In a bloody battle she defeated Mahishasur and his army of demons and saved the world. Sometimes Durga rides a tiger. When she gets angry, even more terrifying form, Kali, springs from Durga's forehead.