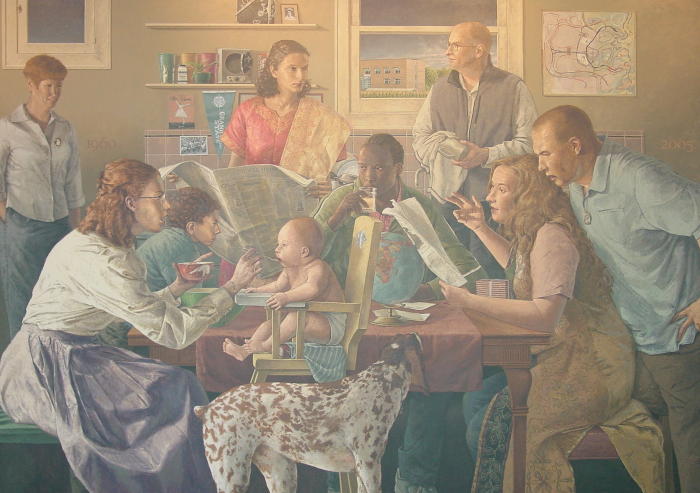 Photo of a large painting with many figures seated around a kitchen table - woman feeding her baby, man washing a coffee mug, woman reading newspaper with man behind her who is mad, plus many others, and other symbolic objects. (A Painting For Grand Valley StateUniversity's 45th Anniversary)

The original painting for this digital print was made for the 45th Anniversary of GVSU and is currently located on the GVSU Allendale Campus in Lake Ontario Hall. Levels of Knowledge refers to multiple intelligences, the layers of understanding and misunderstanding inherent in communication and the variety of academic programs at Grand Valley State University. Levels of Knowledge also refers to the viewer's knowledge and ability to assign context to each figure, juxtaposition or object in the painting. The primary structures of the composition are two fan shapes radiating from the dog and the center standing woman, and an X crossing at the baby's head. Thematically and compositionally, the painting is purposefully reminiscent of traditional Last Supper images, paintings of figures around a table by Georges De la Tour, Caravaggio and Jan Steen, and dinner scenes by Virginia Woolf. The conceptual starting point of the painting is the woman at the far left. The figure is Diane Hatch, who was the first person to enroll at Grand Valley in 1963. She is the only specifically historical person in the painting. Diane stands in the kitchen of the original farmhouse where she enrolled, enjoying the interaction of the people around the table, who represent a variety of events, issues and decades. The visual focal point of the painting is the mother feeding her baby; a comparison to the nurturing quality of the educational process. The mother models behavior by alternately smiling, singing and opening her mouth. She is the center of her baby's universe. As such, the mother wears a sun on her charm bracelet. The rest of the solar system is represented in various forms or levels throughout the painting.The mother's first child leans on the table behind her. He is forming values by watching the two figures across the table. The woman he is gazing at is a Grand Valley hippie student. She is reading a radical Lanthorn issue from the late 60s, one of which was confiscated by the Ottawa County Sheriff. The hippie loves the content of the paper, which supports her values and view of the world. Behind her is a war veteran, who is outraged by the impoverished values of the counterculture paper. The last seated figure is a politically displaced student from Africa wearing the colors of the Sudanese flag, representing one of the most recent waves of immigrants to settle in West Michigan. Having just read a letter from home, he thinks about his homeland. His eyes stray to the boy, whose childhood has been extremely different from his own. Standing behind the African student is a retired patriarch. Once an indispensable colleague and father at the center of his work and home, he now finds himself in the background gladly assuming a supporting role. Next to him is a woman from India, who like all immigrants, must find a proper balance between the traditional values of her upbringing and the values necessary to survive in an unfamiliar culture. Behind the figures, on shelves and hanging on the wall, are a variety of objects that relate to Grand Valley State University and various eras. Dawn breaks outside the right window revealing the location of this painting, Lake Ontario Hall. It sits in a cornfield of the original farm.