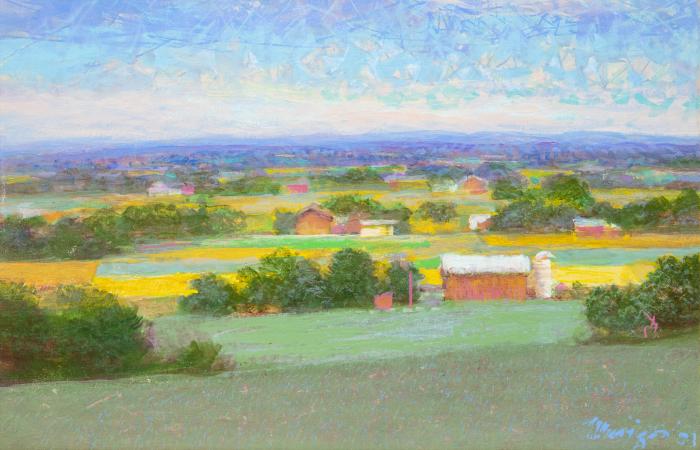 Top portion of the canvas is sky blue, followed by grassy rolling hills in greens, yellows and browns. Buildings scattered throughout are mostly red and white.

As a boy growing up in Grand Rapids, Michigan, Armand Merizon was possessed by a wandering spirit, and resisted the confinement of his early years among his family of strict Dutch immigrants. He lived through the Great Depression, joined the military during World War II, and studied art in New York and Europe. He was a visionary who experienced the world at-large to be both his most suited classroom and greatest teacher. Merizon was an artist who refused to be held to any one style or template for how art should be represented. He threw off the mantle of tradition and perfected his own style; adding bright colors, abstract patterns, and textures to even the most common of landscapes. He proved to be a prolific painter, even after having been diagnosed with macular degeneration and rheumatoid arthritis. These health issues forced him to evolve his painting style, but never slow ed his dedication to the arts. He is quoted with saying: "I will paint until my nose touches the canvas".