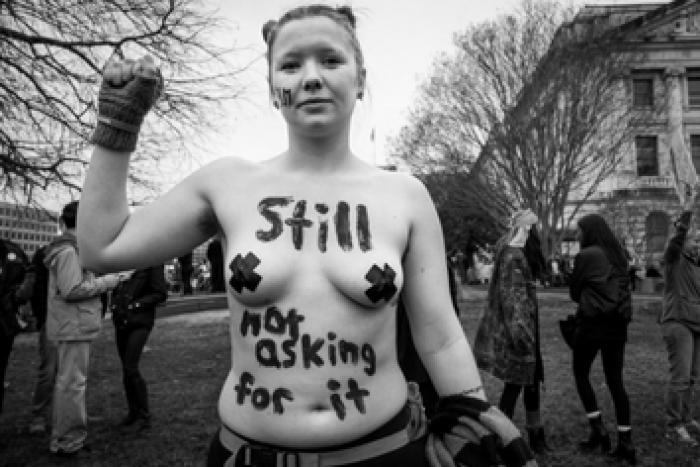 Women's March on the White House day after the inauguration of Pres. Donald Trump, Washington, D.C.

A black and white horizontal photograph of a nude woman with the words "Still not asking for it" written on her body. There is a small crowd of women standing behind her.

The Women’s March was a protest on January 21, 2017, the day after the inauguration of Donald Trump as US president. As the largest single-day protest in US history, it was prompted by several comments by Trump that were considered by many as offensive and anti-women. The protests goals included the protection of women’s rights, safety, health and families, while recognizing and celebrating diverse and vibrant communities around the United States. Internationally-known documentary photographer Donna Ferrato was there to document the march and protest. For nearly 3 decades, Ferrato has worked tirelessly to document and promote women's rights and justice for survivors of domestic violence. In 2014, Ferrato launched “I am Unbeatable,” a campaign and collection of images with stories from real people living within the world of domestic violence in order to expose, document and help prevent violence against women and children.