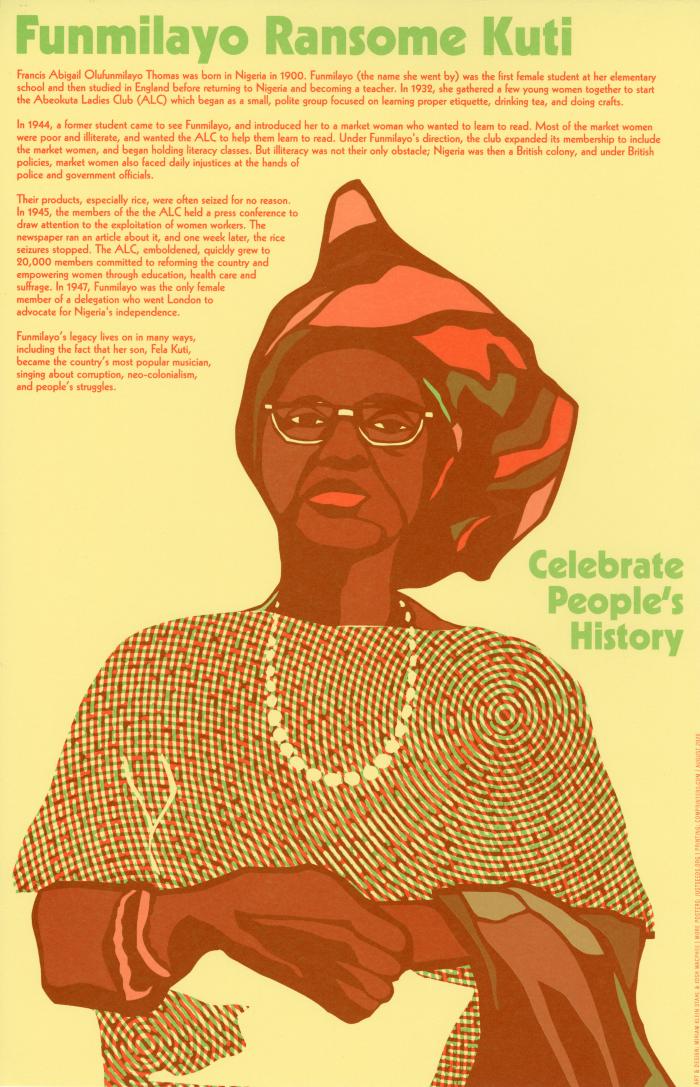 A yellow, orange, and green poster with a woman in the center of it. On the upper right side there is text, and it reads: “Funmilayo Ransome Kuti. Francis Abigail Olufunmilayo Thomas was born in Nigeria in 1900. Funmilayo (the name she went by) was the first female student at her elementary school and then studied in England before returning to Nigeria and becoming a teacher. In 1932, she gathered a few young women together to start the Abeokuta Ladies Club (ALC) which began as a small, polite group focused on learning proper etiquette, drinking tea, and doing crafts. In 1944, a former student came to see Funmilayo, and introduced her to a market woman who wanted to learn to read. Most of the market women were poor and illiterate, and wanted the ALC to help them learn to read. Under Funmilayo’s direction, the club expanded its membership to include the market women, and began holding literacy classes. But illiteracy was not their only obstacle; Nigeria was then a British colony, and under British policies, market women also faced daily injustices at the hands of police and government officials. Their products, especially rice, were often seized for no reason. In 1945, the members of the ALC held a press conference to draw attention to the exploitation of women workers. The newspaper ran an article about it, and one week later, the rice seizures stopped. The ALC, emboldened, quickly grew to 20,000 members committed to reforming the country and empowering women through education, health care and suffrage. In 1947, Funmilayo was the only female member of a delegation who went London to advocate for Nigeria’s independence. Funmilayo’s legacy lives on in many ways, including the fact that her son, Fela Kuti, became the country’s most popular musician, singing about corruption, neocolonialism, and people’s struggles.”