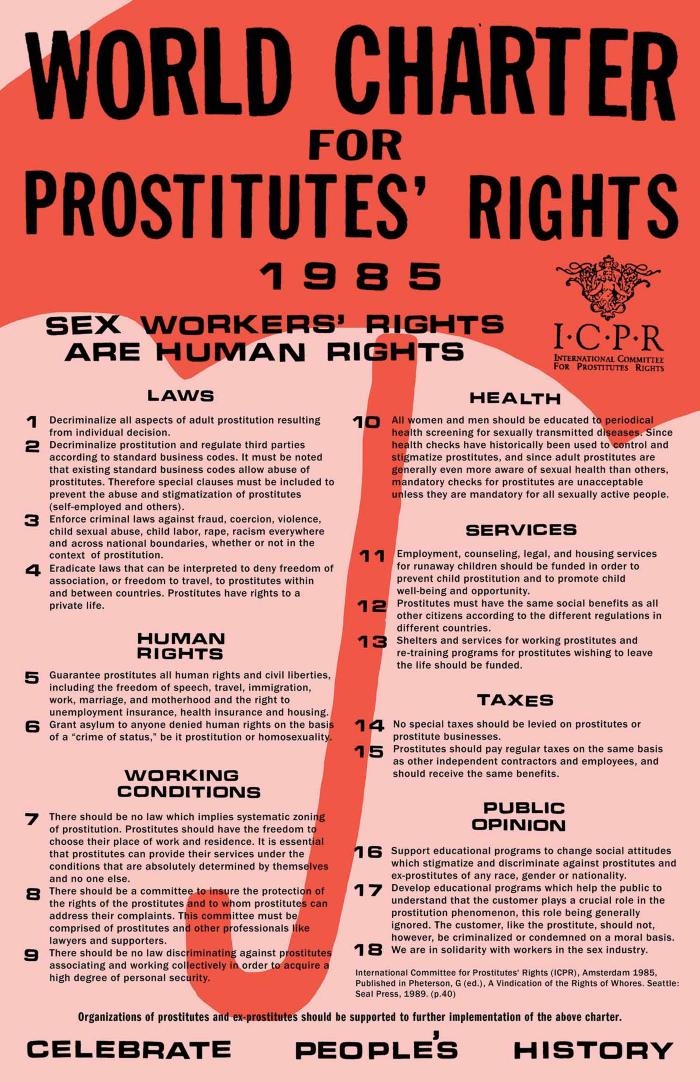 This is a red, pink, and black poster with an umbrella in the background. There is "World Charter for Prostitutes Rights 1986" and "Sex workers rights are human rights" at the top of the image. Below this it then compiles the list of demands for laws, human rights, working conditions, health, services, taxes, and public opinion. The text reads: "World Charter for Prostitutes’ Rights 1985 Sex Workers’ Rights are Human Rights Laws Decriminalize all aspects of adult prostitution resulting from individual decision. Decriminalize prostitution and regulate third parties according to standard business codes. It must be noted that existing standard business codes allow abuse of prostitutes. Therefore special clauses must be included to prevent the abuse and stigmatization of prostitutes (self-employed and others). Enforce criminal laws against fraud, coercion, violence, child sexual abuse, child labor, rape, racism everywhere and across national boundaries, whether or not in the context of prostitution. Eradicate laws that can be interpreted to deny freedom of association, or freedom to travel, to prostitutes within and between countries. Prostitutes have rights to a private life. Human Rights Guarantee prostitutes all human rights and civil liberties, including the freedom of speech, travel, immigration, work, marriage, and motherhood and the right to unemployment insurance, health insurance and housing. Grant asylum to anyone denied human rights on the basis of a “crime of status,” be it prostitution or homosexuality. Working Conditions There should be no law which implies systematic zoning of prostitution. Prostitutes should have the freedom to choose their place of work and residence. It is essential that prostitutes can provide their services under the conditions that are absolutely determined by themselves and no one else. There should be a committee to insure the protection of the rights of the prostitutes and to whom prostitutes can address their complaints. This committee must be comprised of prostitutes and other professionals like lawyers and supporters. There should be no law discriminating against prostitutes associating and working collectively in order to acquire a high degree of personal security. Health All women and men should be educated to periodical health screening for sexually transmitted diseases. Since health checks have historically been used to control and stigmatize prostitutes, and since adult prostitutes are generally even more aware of sexual health than others, mandatory checks for prostitutes are unacceptable unless they are mandatory for all sexually active people. Services Employment, counseling, legal, and housing services for runaway children should be funded in order to prevent child prostitution and to promote child well-being and opportunity. Prostitutes must have the same social benefits as all other citizens according to the different regulations in different countries. Shelters and services for working prostitutes and re-training programs for prostitutes wishing to leave the life should be funded. Taxes No special taxes should be levied on prostitutes or prostitute businesses. Prostitutes should pay regular taxes on the same basis as other independent contractors and employees, and should receive the same benefits. Public Opinion Support educational programs to change social attitudes which stigmatize and discriminate against prostitutes and ex-prostitutes of any race, gender or nationality. Develop educational programs which help the public to understand that the customer plays a crucial role in the prostitution phenomenon, this role being generally ignored. The customer, like the prostitute, should not, however, be criminalized or condemned on a moral basis. We are in solidarity with workers in the sex industry. Organizations of prostitutes and ex-prostitutes should be supported to further implementation of the above charter."