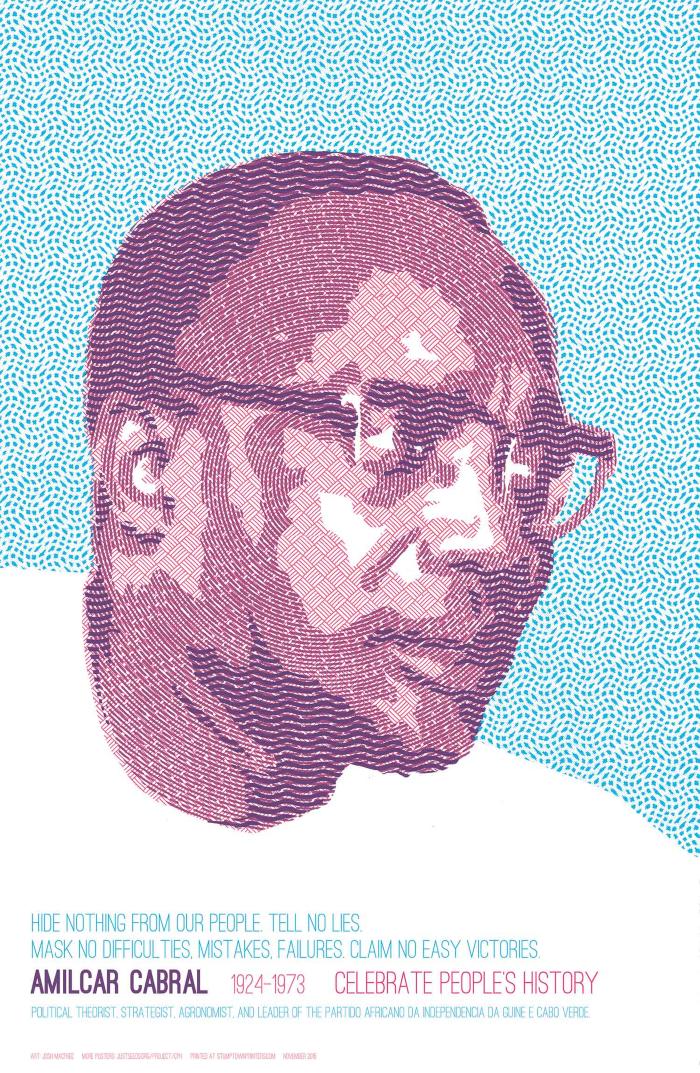 This poster is a portrait of a man in front of a blue background in a white shirt. There is a line beneath him that reads, "Hide other from our people. Tell no lies. Mask no difficulties. Mistakes. Failures. Claim no easy victories.” This is on top of a name, Amilcar Cabral, and the Celebrate People's History logo.

The Celebrate People’s History posters are rooted in the do-it-yourself tradition of mass-produced political propaganda. These posters embody democracy, inclusion, and group participation in the writing and interpretation of the past. Unlike most political posters, the posters part of the Celebrate People’s History series tell the stories of the underdogs, those individuals and groups helping to move forward the collective struggle of humanity to create a more just world. For 20 years, over 130 different posters have been displayed on the streets of over a dozen cities representing over 150 artists and writers. The Celebrate People’s History Poster Series has been organized and curated by Josh MacPhee since 1998. Amilcar Lopes da Costa Cabral (1924-1973) was one of Africa’s foremost anti-colonial leaders. He led the nationalist movement of Guinea-Bissau and the Cape Verde Islands and the ensuing war of independence in Guinea-Bissau. After attending university in Lisbon, Cabral became an agronomist for the Portuguese colonial authorities. This position gave him the opportunity to travel and interact with people from various cultures, connections that later became very important for his political career. For Cabral, culture was key to national liberations. He looked for African leaders to re-embrace indigenous African culture, ultimately creating independent social and cultural identities. He was assassinated on January 20, 1973, only eight months before Guinea-Bissau’s declaration of independence.