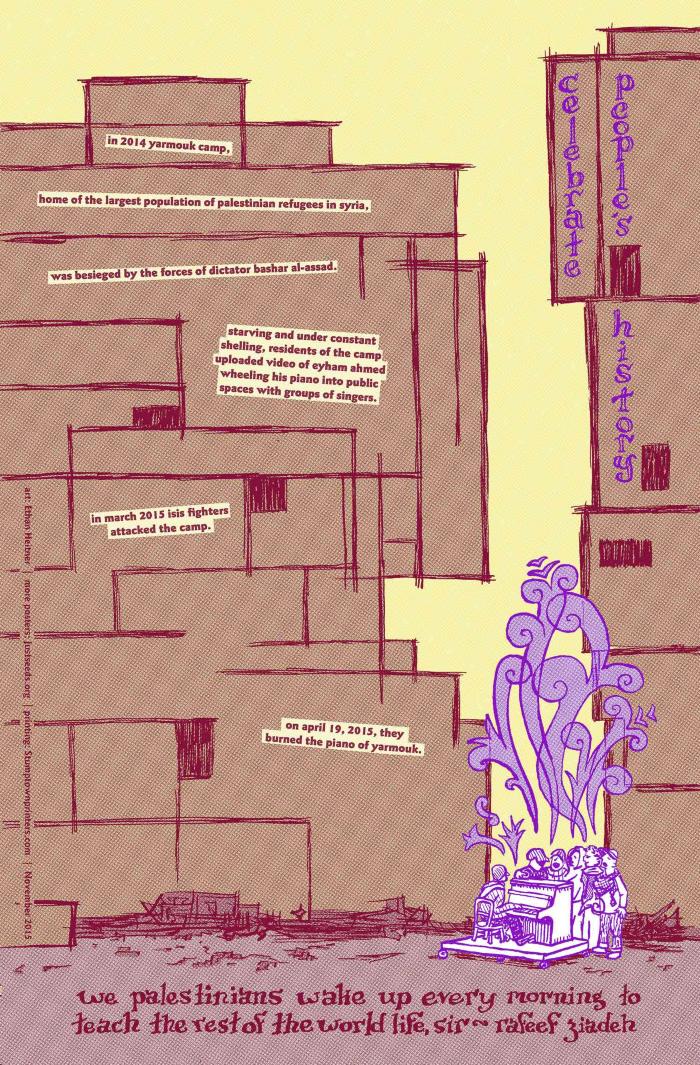 This poster is yellow, brown, maroon, and purple. There are stacks of brown blocks that have text following the different lines of maroon on it. The text reads, “In 2014 Yarmouk camp, home of the largest population of Palestinian refugees in Syria, was besieged by the forces of dictator Bashar Al-Assad. Starving and under constant shelling, residents of the camp uploaded video of Eyham Ahmed wheeling his piano into public spaces with groups of singers. In March 2015 Isis fighters attacked the camp. On April 19, 2015, they burned the piano of Yarmouk.” To the right of the stack is a group of people standing beside a piano that has smoke coming from it and a man is playing it. There is a quote at the bottom of the image that is “We Palestinians wake up every morning to teach the rest of the world life, sir — Rafeef Ziadeh.

The Celebrate People’s History posters are rooted in the do-it-yourself tradition of mass-produced political propaganda. These posters embody democracy, inclusion, and group participation in the writing and interpretation of the past. Unlike most political posters, the posters part of the Celebrate People’s History series tell the stories of the underdogs, those individuals and groups helping to move forward the collective struggle of humanity to create a more just world. For 20 years, over 130 different posters have been displayed on the streets of over a dozen cities representing over 150 artists and writers. The Celebrate People’s History Poster Series has been organized and curated by Josh MacPhee since 1998. This poster is dedicated to Palestinian artists and culture workers."