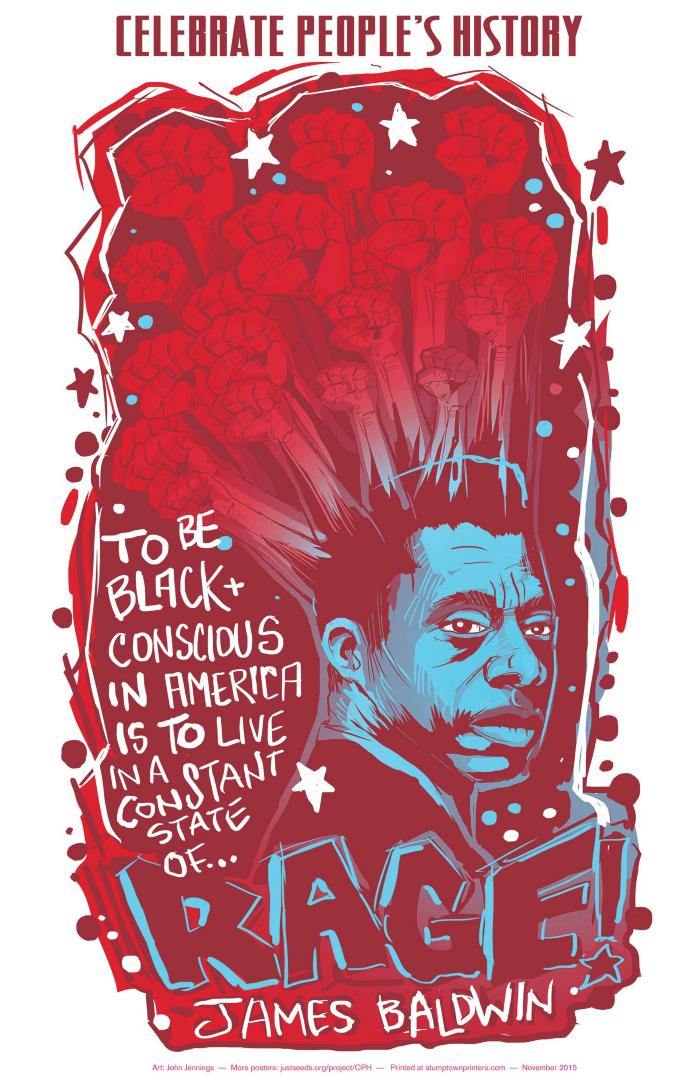 This poster is red and blue with fists in the top of the image and a man in blue in the bottom right. There is a quote in white text on the left that says, "To be Black + conscious in America is to live in a constant state of rage" - James Baldwin.

The Celebrate People’s History posters are rooted in the do-it-yourself tradition of mass-produced political propaganda. These posters embody democracy, inclusion, and group participation in the writing and interpretation of the past. Unlike most political posters, the posters part of the Celebrate People’s History series tell the stories of the underdogs, those individuals and groups helping to move forward the collective struggle of humanity to create a more just world. For 20 years, over 130 different posters have been displayed on the streets of over a dozen cities representing over 150 artists and writers. The Celebrate People’s History Poster Series has been organized and curated by Josh MacPhee since 1998. James Arthur Baldwin (1924-1987) was an American novelist, playwright, poet and activist. His writings explore the intricacies of racial, sexual, and class distinctions in mid-twentieth century United States. His novels and plays fictionalize fundamental personal questions along with social and psychological pressures put on individuals by society. Themes of race, class, and sexuality are critiqued alongside major political movements such as the civil rights movement and the gay liberation movement. In 2018, one of his novels, If Beale Street Could Talk, was adapted into an Academy-Award winning film of the same name.