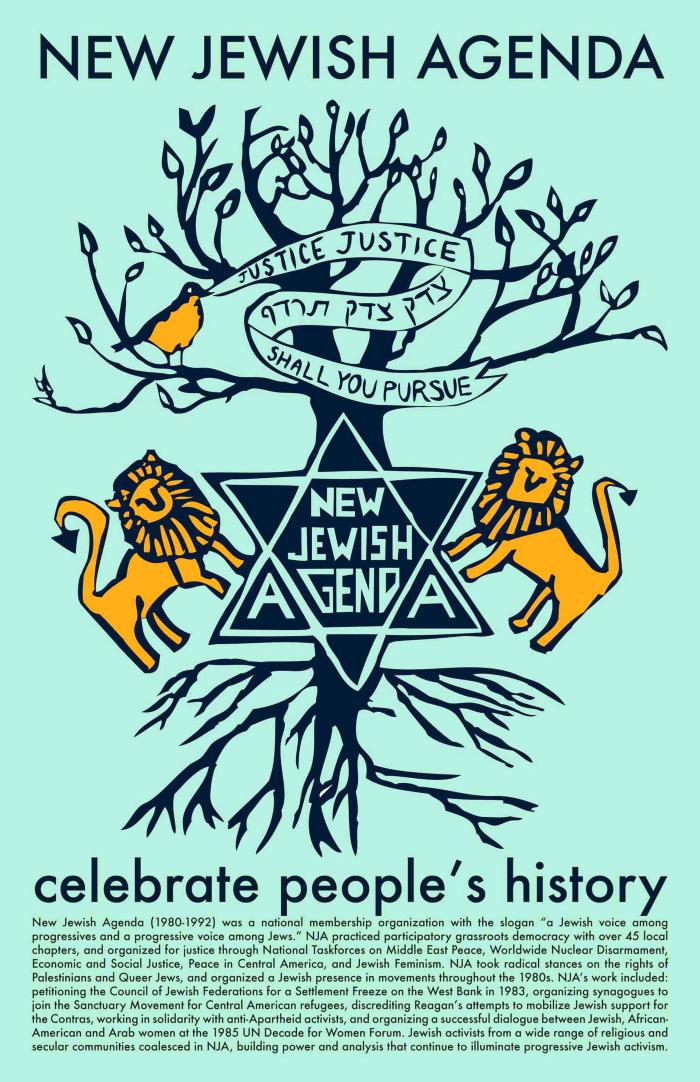 A light sea foam green, dark blue, and yellow poster that has a star of David in the center and a tree growing out from it with a ribbon in its branches. There are two lions, one on either side and a bird in the branches. At the bottom it says Celebrate People's History and then has a paragraph that reads: “New Jewish Agenda (1980-1992) was a national membership organization with the slogan “a Jewish voice among progressives and a progressive voice among Jews.” NJA practiced participatory grassroots democracy with over 45 local chapters, and organized for justice through National Taskforces on Middle East Peace, Worldwide Nuclear Disarmament, Economic and Social Justice, Peace in Central America, and Jewish Feminism. NJA took radical stances on the rights of Palestinians and Queer Jews, and organized a Jewish presence in movements throughout the 1980s. NJA’s work included: Petitioning the Council of Jewish Federations for a Settlement Freeze on the West Bank in 1983, organizing synagogues to join the Sanctuary Movement for Central American refugees, discrediting Reagan’s attempts to mobilize Jewish support for the Contras, working in solidarity with anti-apartheid activists, and organizing a successful dialogue between Jewish, African-American and Arab women at the 1985 UN Decade for Women Forum. Jewish activists from a wide range of religious and secular communities coalesced in NJA, building power and analysis that continue to illuminate progress Jewish activism.”