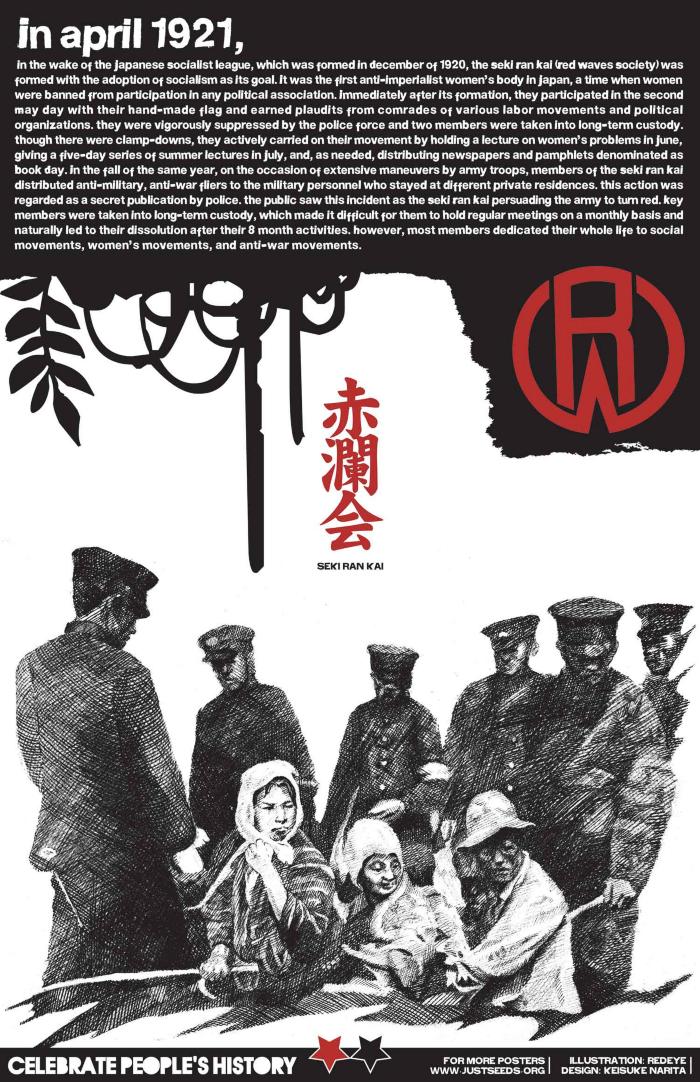 A black, white, and red poster that has a group of people surrounded by troops sitting in the middle. There is Japanese text written above them in red. At the top of the image there is text in English that reads: "In April 1921, In the wake of the Japanese socialist league, which was formed in December of 1920, the Seki Ran Kai (red waves society) was formed with the adoption of socialism as its goal. It was the first anti-imperialist women’s body in Japan, at a time when women were banned from participation in any political association. Immediately after its formation, they participated in the second May Day with their hand-made flag and earned plaudits from comrades of various labor movements and political organizations. They were vigorously suppressed by the police force and two members were taken into long-term custody. Though there were clamp-downs, they actively carried on their movement by holding a lecture on women’s problems in June, giving a five-day series of summer lectures in July, and, as needed, distributing newspapers and pamphlets dominated as book day. In the fall of the same year, on the occasion of extensive maneuvers by army troops, members of the Seki Ran Kai distributed anti-military, anti-war flyers to the military personnel who stayed at different private residences, this actions regarded as a secret publication by police. The public saw this incident as the Seki Ran Kai persuading the army to turn red. Key members were taken into long-term custody, which made it difficult for them to hold regular meetings on a monthly basis and naturally let to their dissolution after their 8 month activities. However, most members dedicated their whole life to social movements, women’s movements, and anti-war movements.”