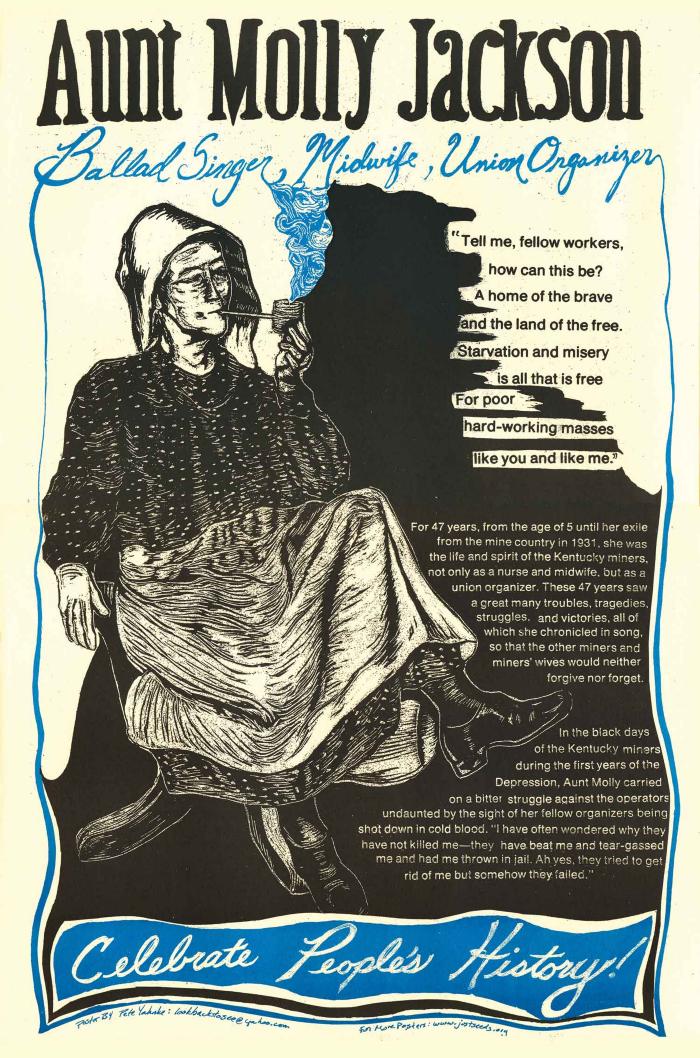 Poster is titled :“Aunt Molly Jackson (1880-1960) Ballad Singer, Midwife, Union Organizer." A black, white, and blue poster where there is a woman sitting on the ground on the left side. There is a black background behind her and there is text above and to the right of her. There is a blue strip on the bottom that has "Celebrate People's History". Main text of the poster reads: “Tell me, fellow workers, how can this be? A home of the brave an the land of the free. Starvation and misery is all that is free for poor hard-working masses like you and like me. For forty-seven years, for the age of five until her exile from the mine country in 1931, she was the life and spirit of the Kentucky miners, not only as a nurse and midwife, but as a union organizer. These forty-seven years saw a great many troubles, tragedies, struggles, and victories, all of which she chronicled in song, so that the other miners and miners’ wives would neither forgive nor forget. “In the black days of the Kentucky miners during the first years of the Depression, Aunt Molly carried on a bitter struggle against the operators undaunted by the sight of her fellow organizers being shot down in cold blood. “I have often wondered why they have not killed me—they have beat me and tear-gassed me and had me thrown in jail. Ah yes, they tried to get rid of me but somehow they failed.”

The Celebrate People’s History posters are rooted in the do-it-yourself tradition of mass-produced political propaganda. These posters embody democracy, inclusion, and group participation in the writing and interpretation of the past. Unlike most political posters, the posters part of the Celebrate People’s History series tell the stories of the underdogs, those individuals and groups helping to move forward the collective struggle of humanity to create a more just world. For 20 years, over 130 different posters have been displayed on the streets of over a dozen cities representing over 150 artists and writers. The Celebrate People’s History Poster Series has been organized and curated by Josh MacPhee since 1998. "Union organizer, nurse, midwife and ballad singer, Aunt Molly Jackson was the life and spirit of the Kentucky miners for the first 30 years of the 20th century."