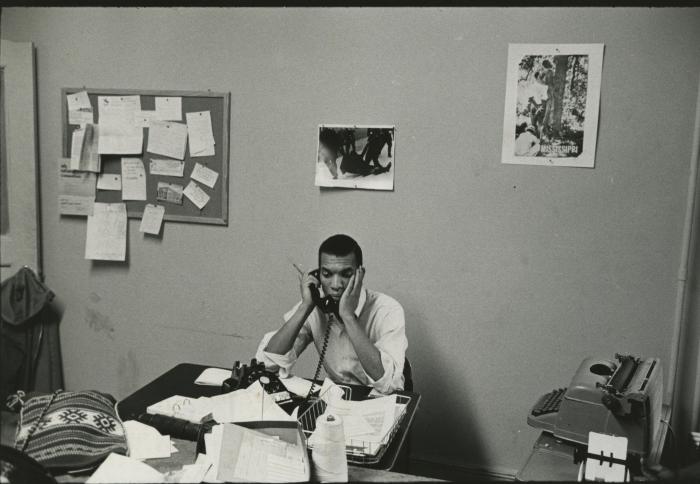 A black and white photo of a man at a desk that is completely covered in papers and books, talking on the phone. There is a bulletin board behind him on the wall on the left and two pictures on the wall to the right.

Ivanhoe Donaldson was a leader in the Civil Rights Movement, championing voting and registration rights for Black Americans. In young adulthood, Donaldson attended Michigan State University’s engineering program and during this time he was involved in the SNCC (Student Non-Violent Coordinating Committee) and driving car loads of food and medical supplies that he and his peers gathered to disperse through communities down South who were in economic crisis. While a student, Malcolm X visited the East Lansing campus and his message about political self-determinism and Black nationalism and was a personal launching point for Donaldson. After being arrested for drug trafficking on another drive down to Mississippi to donate resources (like ibuprofen, which was what the charge was for), he devoted himself to public service and the Movement. Donaldson then became a field secretary for SNCC and remained apart of the organization, after its adoption of the Black Power movement under Stokely Carmichael’s leadership in 1966. Later in his career, as Director of SNCC’s New York office, he started working on political campaigns to get Black leaders into integral positions of power in the United States government. He was fantastically successful on several occasions, but most notably was Marion Barry’s campaign to become mayor of Washington D.C.—who went on to serve two terms.