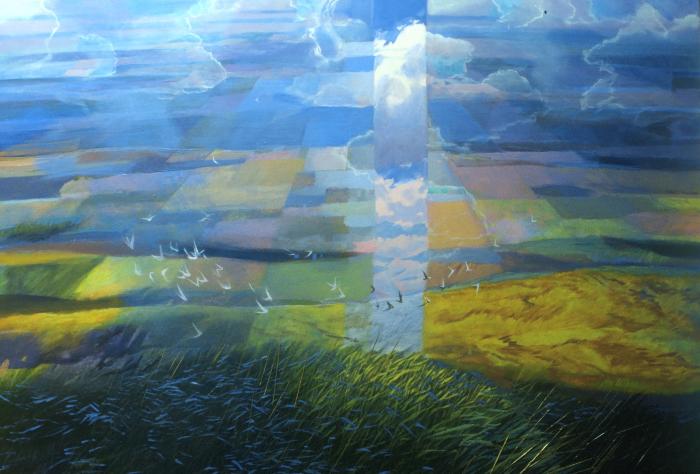 Gift of Bette and Bernon Young

Oil on canvas painting of a pastoral scene with "rays of sunshine" that distort the colors. Birds fly through the sky portion of the image.

Armand Merizon was an artist who refused to be held to any one style or template for how art should be represented. He threw off the mantle of tradition, worked through his disabilities, and refused to let go of the brush that both defined and bound him from his earliest years to his last breath. As a boy growing up in Grand Rapids, MI, he was possessed by a wandering spirit, and resisted the confinement of his early years among his family of strict Dutch immigrants. He struggled with illness and the confinement of schools. He lived through the Great Depression, joined the military during World War II, and studied art in New York and Europe. Merizon was a visionary who experienced the world at-large to be both his most suited classroom and greatest teacher. Merizon’s work never stopped expanding throughout his life and his restlessness was clearly illustrated on canvas, where he created more than 1,000 works of art during his lifetime. The GVSU Art Gallery Collection holds the largest public collection of original Armand Merizon paintings in the world and hosts the Armand Merizon: Online Digital Library, a full catalogue raisonne (https://ArmandMerizon.com).