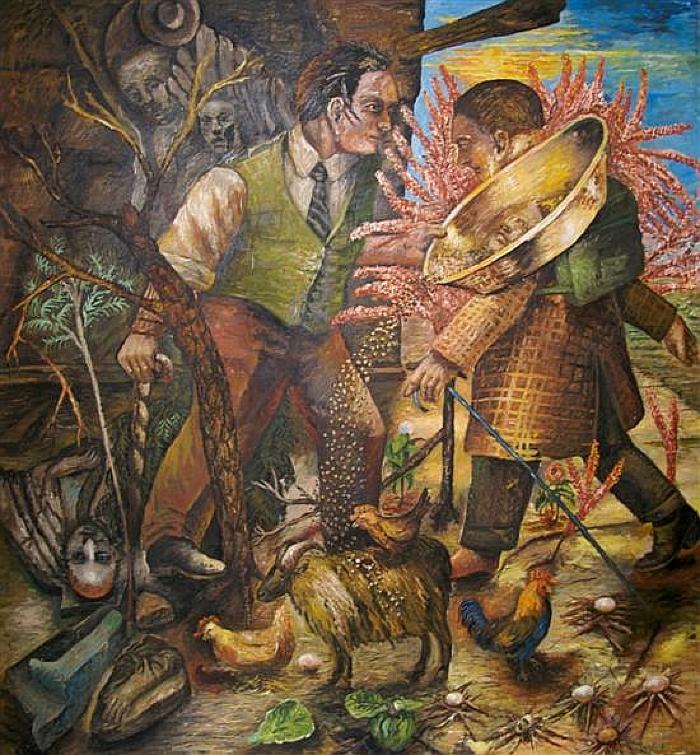 IDC; Between Open Shelving Units A and B

Campbell’s figurative style drew on a wide range of artistic sources and historic imagery. While the titles and content are often puzzling and seem paradoxical, his work makes connections between historical and contemporary settings. He frequently clothed his subjects in tweedy suits making a connection to the surreal ridiculousness of the English gentlemen (whom Stanley Spencer’s figures in his wartime ‘Glasgow Shipyards’ paintings are depicted and to whom Campbell gave Renaissance poses in setting from Dutch 17th century paintings). According to John McKechnie, the director of the Glasgow Print Studio, at which Campbell exhibited: "If it wasn't for Steven Campbell, we would never have the focus we do now on visual art in Glasgow. Before Steven came along there really wasn't any expectation that you could make it as an artist on an international scene." - Quoted in Phil Miller, 'Rare Hornel painting for sale at art fair', in The Herald (Scottish newspaper), 27 March 2008