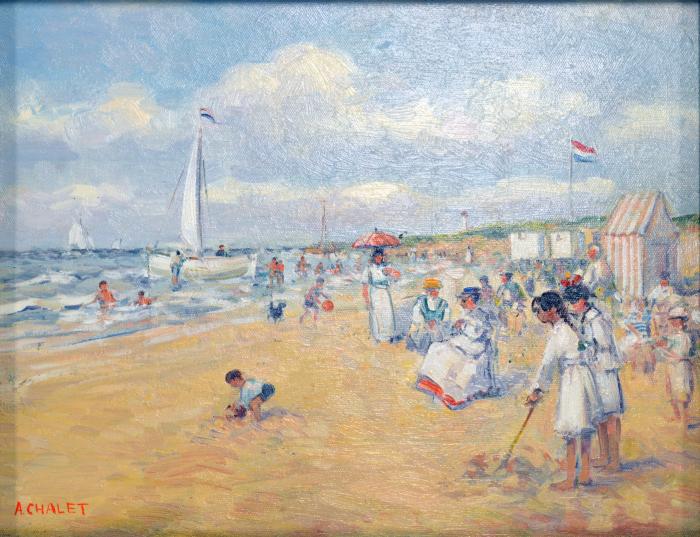 A scene of people on a French beach

Andre Chalet was born in France in 1946. As a self-taught artist, Andre was able to maintain his own identity. Inspired by the French Impressionists, he paints the world around him as he sees it. His work is mainly figurative landscapes, especially depicting children at play and interacting. His goal is to show the golden life and bring back the memories of his youth when life was much simpler. His work is in many private collections and is shown in galleries in Europe and the U.S.

Oil painting is the process of painting with pigments with a medium of drying oil as the binder. Commonly used drying oils include linseed oil, poppy seed oil, walnut oil, and safflower oil. The choice of oil imparts a range of properties to the oil paint, such as the amount of yellowing or drying time. Certain differences, depending on the oil, are also visible in the sheen of the paints. An artist might use several different oils in the same painting depending on specific pigments and effects desired. The paints themselves also develop a particular consistency depending on the medium. The oil may be boiled with a resin, such as pine resin or frankincense, to create a varnish prized for its body and gloss.

Although oil paint was first used for Buddhist paintings by Indian and Chinese painters in western Afghanistan sometime between the fifth and tenth centuries, it did not gain popularity until the 15th century. Its practice may have migrated westward during the Middle Ages. Oil paint eventually became the principal medium used for creating artworks as its advantages became widely known. The transition began with Early Netherlandish painting in Northern Europe, and by the height of the Renaissance oil painting techniques had almost completely replaced the use of tempera paints in the majority of Europe.

In recent years, water miscible oil paint has come to prominence and, to some extent, replaced traditional oil paint. Water-soluble paints contain an emulsifier that allows them to be thinned with water rather than paint thinner, and allows very fast drying times (1–3 days) when compared with traditional oils (1–3 weeks).