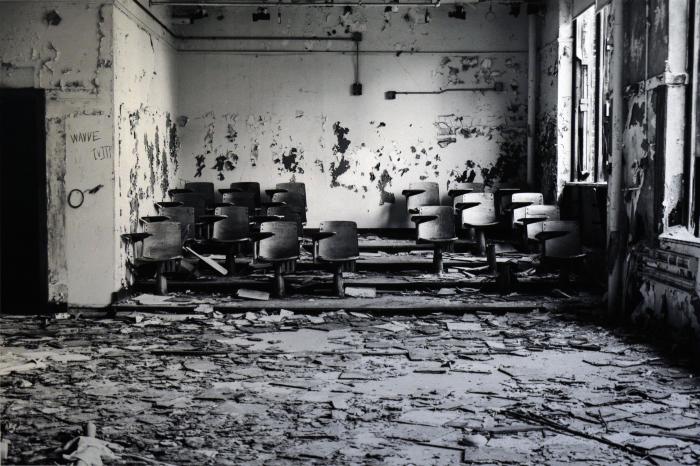 Black and white photo of an abandoned classroom

"With the death of my grandmother heavy on my heart I was desperate to find a way to keep her memory alive. In the heat of the moment after she died I began to panic, and began to search for something that once had no meaning. I began to search for a photo of my grandmothers hands. The image was a little out of focus and showed part of her hands with her rings. I struggled to find it because it held so little meaning to me before, but somehow when faced wit the loss of her, it became priceless. This series emulates the emotions I felt that night. The feeling of knowing someone is gone, never to come back home. I began to find peace in the disarray of these abandoned buildings. The stories they held and new ones they created helped to fill a void. The more I explored all of these places the more they started to fall together. All of the places had something in common, which gave me a feeling of peace. Maybe it was going on the journey or maybe it was the curiosity that filled my lungs, but amongst the rubble, I found solace. The chairs that remained helped to show that life remains after death. It revealed that even during death people leave behind a memory and thee chairs helped to drag me back in. They welcomed me into this place as if the rubble and peeling paint wasn't there. It no longer became about the decay, but about the emotions of finding closure in the chaos. I invite you to find your own peace within these images. In memory of Charleen & Willard Smart"