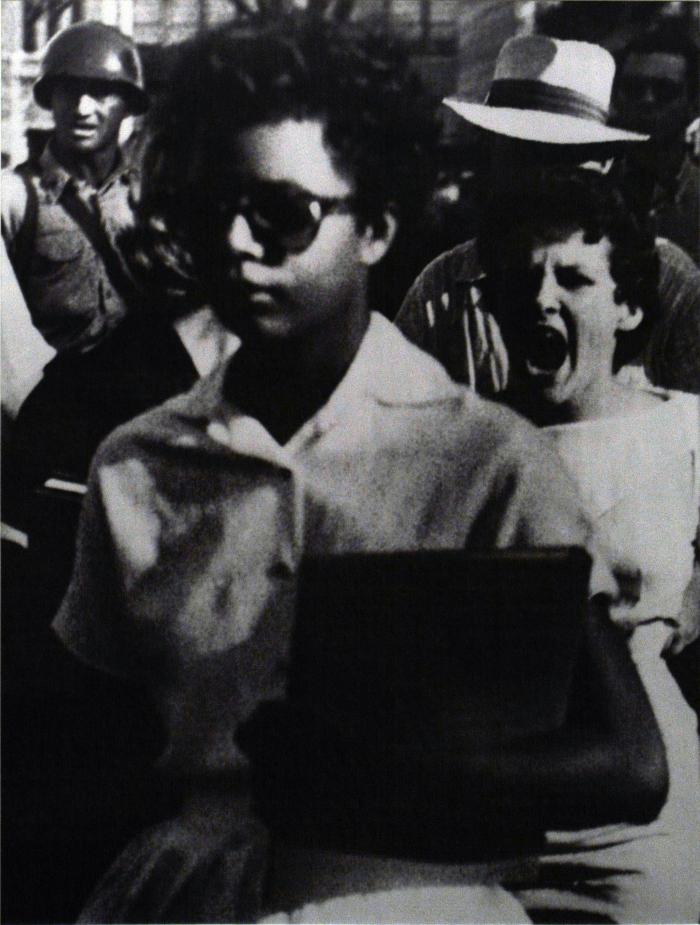 Nine black students enter all-white Central High School in Little Rock, Arkansas after the U.S. Supreme Court ruled unanimously in Brown v. Board of Education of Topeka that racial segregation in educational facilities was unconstitutional. Governor Orval Faubus called out the Arkansas National Guard to surround Central High School and prevent integration. A mob of 400 white civilians gathered at the school and turned violent when the black students began to arrive. The National Guard troops refused to let the black students pass and used their clubs to control the crowd. One of the nine, 15-year-old Elizabeth Eckford, was surrounded by the mob, which threatened to lynch her. She was led to safety by a sympathetic white woman. On September 23, the nine black students managed to gain access to a side door. However, the mob became dangerous when it learned the black students were inside, and the police evacuated them out of fear for their safety. Little Rock’s mayor sent a telegram to the president asking him to send troops. Eisenhower immediately federalized the Arkansas National Guard and approved the deployment of U.S. troops to Little Rock. That evening, from the White House, the president delivered a nationally televised address in which he explained that he had taken the action to defend the rule of law and prevent “mob rule” and “anarchy.” Troops remained at Central High School throughout the school year, but still the black students were subjected to abuse from some white students. Melba Patillo had acid thrown in her eyes, and Elizabeth Eckford was pushed down a flight of stairs. The three male students in the group were beaten. Minnijean Brown was suspended, and later suspended for the rest of the year after continuing to fight back. The other eight students consistently turned the other cheek. On May 27, 1958, Ernest Green, the only senior in the group, became the first black to graduate from Central High School.