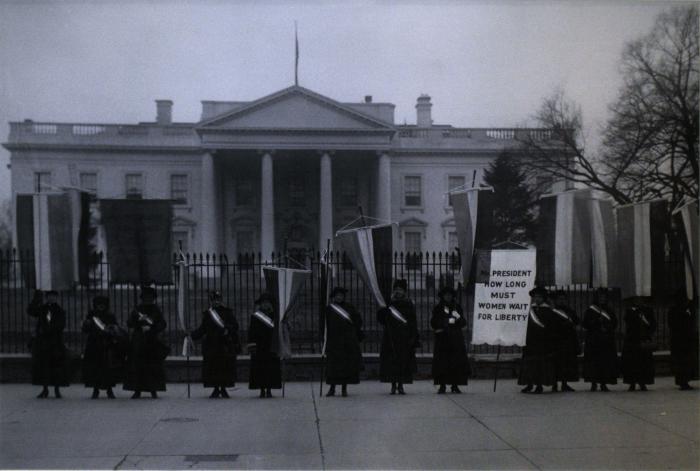 A line of women in black with sashes in front of the White House with a sign asking the president how long they must wait for liberty.

The Silent Sentinels, named that because of their ways of silent protesting, were a group of women organized by Alice Paul and the National Woman's Party. They protested in front of the White House starting in January 1917. The women protested six days a week until June 4, 1919, when the Nineteenth Amendment was passed. Beginning in June 1917 the protesters started getting arrested for "obstructing traffic". Throughout this two and a half year long protest many of the women were harassed, arrested, and unjustly treated by authorities. The leader of the National Woman's Party, Alice Paul, staged a hunger strike in jail after her arrest. Prison doctors had to force-feed those who participated. With all the publicity from protests, as well as the arrests and forced-feedings of women protestors, President Wilson finally lent his support in January 1918. Congress approved, and on August 18, 1920, with the ratification of the Nineteenth Amendment, women achieved the right to vote.