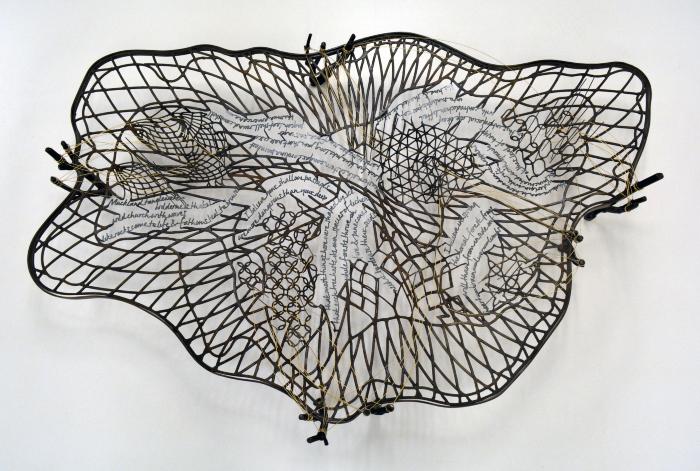 Artist Kim Cridler worked in collaboration with poet Alice Fulton for their exhibition titled “Great Lakes; Images & Word.” For “Basin,” the two worked together to create a sculpture and poem that reflects the impact of living in an area defined and dominated by the Great Lakes. On this work they state: “The effect of the Great Lakes extends well beyond their specific boundaries; their vast watershed feeds into such distant ecological systems as the St. Lawrence Seaway and the Atlantic Ocean. Our collaboration takes the form of a metalwork vessel with a bobbin/wreath circumference. Thread-like streams extrude from the bobbins into a shallow basin, forming patches of poetry and rough-hewn "lace." Some of these areas are marked by pins, as in bobbin-lace making, and the surface speaks to interconnectedness, as lines enter the vessel and morph into new patterns. Handmade lace evokes anomalous, biomorphic forms rather than inert, mass-produced ones, and the tension between bobbin and pinned pattern suggests the uncertain ground between synthesis and dissolution. The poem, a recombinant linguistic structure that can be read from various angles and in different orders, also enacts the instability of the natural world and its resistance to transparent legibility. The figures of traditional lace are held together by tiny joining threads that resemble two equal signs. The embedded poem includes this glyph, “=” as a means of invoking abnegated presence; it lists wildlife species once indigenous to the watershed that are now extinct as the vessel's openwork invites meditation on the permeable fragility of the watershed. It's abstraction of the Great Lakes basin includes kettle lakes: bits of buried glacier ice that melted and formed small, deep bodies emblematic of transience and emergence. The lakes are at once a catalyst for change and a repository of cultural and natural history. By positing a craft traditionally associated with women as a powerfully pervasive, connective tissue, we hope to query stereotypical of women's art as decorative or marginal. Finally, we are grateful for the chance to collaborate on a work that deeply enriched our understanding of the complex watershed in which we live.”