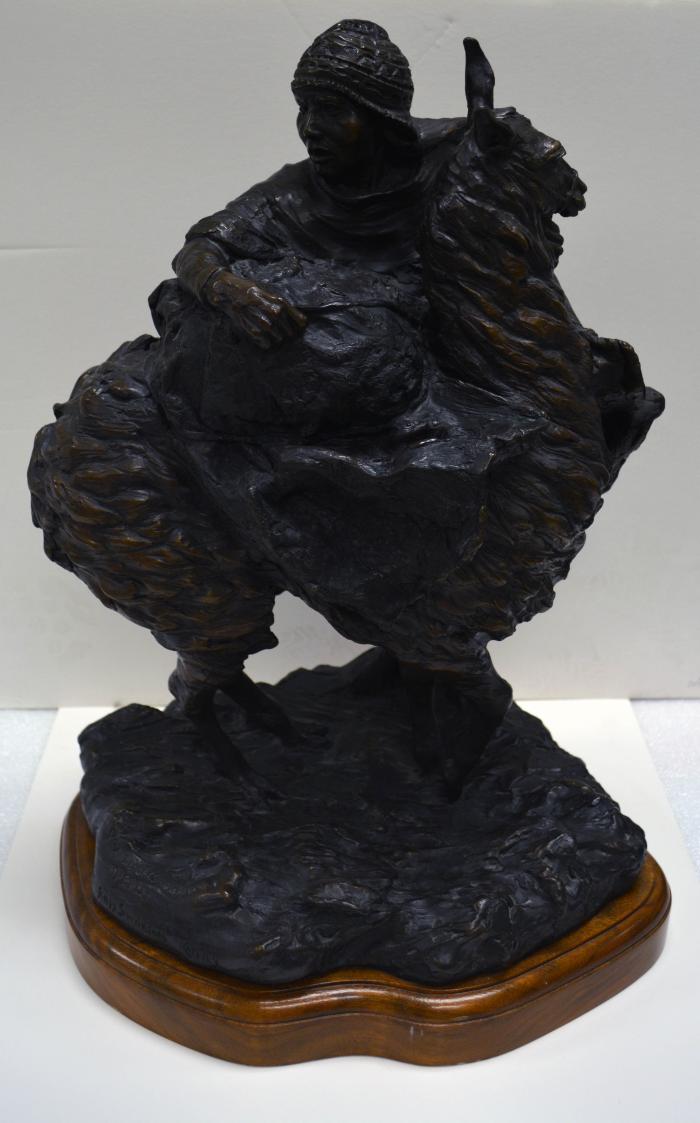 Gifted by Jack E. and Martha Stuart Ketchum in gratitude to Gordon and Rosalynn Stuart.

Bronze is an alloy consisting primarily of copper, commonly with about 12% tin and often with the addition of other metals (such as aluminium, manganese, nickel or zinc) and sometimes non-metals or metalloids such as arsenic, phosphorus or silicon. These additions produce a range of alloys that may be harder than copper alone, or have other useful properties, such as stiffness, ductility, or machinability.

The archeological period where bronze was the hardest metal in widespread use is known as the Bronze Age. In the ancient Near East this began with the rise of Sumer in the 4th millennium BC, with India and China starting to use bronze around the same time; everywhere it gradually spread across regions. The Bronze Age was followed by the Iron Age starting from about 1300 BC and reaching most of Eurasia by about 500 BC, though bronze continued to be much more widely used than it is in modern times.

Because historical pieces were often made of brasses (copper and zinc) and bronzes with different compositions, modern museum and scholarly descriptions of older objects increasingly use the more inclusive term "copper alloy" instead.

Bronze is the most popular metal for cast metal sculptures; a cast bronze sculpture is often called simply a "bronze". It can be used for statues, singly or in groups, reliefs, and small statuettes and figurines, as well as bronze elements to be fitted to other objects such as furniture. It is often gilded to give gilt-bronze or ormolu.

Common bronze alloys have the unusual and desirable property of expanding slightly just before they set, thus filling the finest details of a mould. Then, as the bronze cools, it shrinks a little, making it easier to separate from the mould. Their strength and ductility (lack of brittleness) is an advantage when figures in action are to be created, especially when compared to various ceramic or stone materials (such as marble sculpture). These qualities allow the creation of extended figures, as in Jeté, or figures that have small cross sections in their support, such as the equestrian statue of Richard the Lionheart.

But the value of the bronze for uses other than making statues is disadvantageous to the preservation of sculptures; few large ancient bronzes have survived, as many were melted down to make weapons or ammunition in times of war or to create new sculptures commemorating the victors, while far more stone and ceramic works have come through the centuries, even if only in fragments. As recently as 2007 several life sized bronze sculptures by John Waddell were stolen, probably due to the value of the metal after the work has been melted.