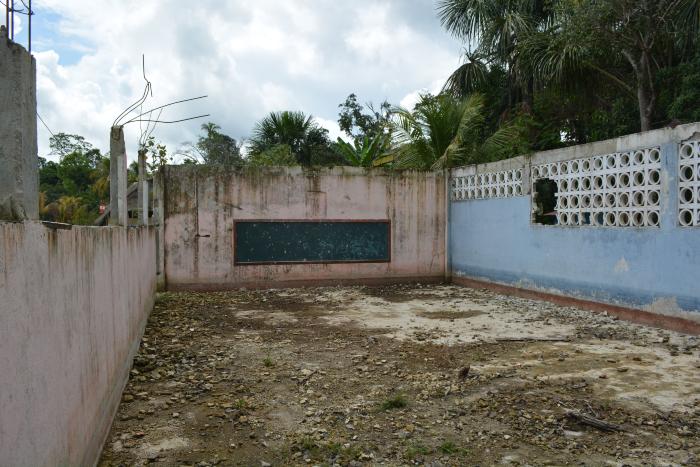 Inside room missing a roof with a rubble floor, two dirty pink walls, and one blue. A chalkboard hangs on the far wall.

"This school was once one of the largest and most attractive school buildings along the Tahuayo River. The building now sits dismantled and abandoned because the village where it is located is itself largely dismantled and abandoned, dropping in population from over 40 families in 1993 to just 8 families today. Migration from rural to urban areas has been pervasive in the Amazon for decades, but has been especially strong in Tahuyo River communities during the last 15 years." - Jim Penn

Urbanization refers to the population shift from rural to urban areas, "the gradual increase in the proportion of people living in urban areas", and the ways in which each society adapts to the change. It is predominantly the process by which towns and cities are formed and become larger as more people begin living and working in central areas. The United Nations projected that half of the world's population would live in urban areas at the end of 2008. It is predicted that by 2050 about 64% of the developing world and 86% of the developed world will be urbanized. That is equivalent to approximately 3 billion urbanites by 2050, much of which will occur in Africa and Asia. Notably, the United Nations has also recently projected that nearly all global population growth from 2017 to 2030 will be absorbed by cities, about 1.1 billion new urbanites over the next 13 years.

Urbanization is relevant to a range of disciplines, including geography, sociology, economics, urban planning, and public health. The phenomenon has been closely linked to modernization, industrialization, and the sociological process of rationalization. Urbanization can be seen as a specific condition at a set time (e.g. the proportion of total population or area in cities or towns) or as an increase in that condition over time. So urbanization can be quantified either in terms of, say, the level of urban development relative to the overall population, or as the rate at which the urban proportion of the population is increasing. Urbanization creates enormous social, economic and environmental changes, which provide an opportunity for sustainability with the “potential to use resources more efficiently, to create more sustainable land use and to protect the biodiversity of natural ecosystems.”

Urbanization is not merely a modern phenomenon, but a rapid and historic transformation of human social roots on a global scale, whereby predominantly rural culture is being rapidly replaced by predominantly urban culture. The first major change in settlement patterns was the accumulation of hunter-gatherers into villages many thousand years ago. Village culture is characterized by common bloodlines, intimate relationships, and communal behavior whereas urban culture is characterized by distant bloodlines, unfamiliar relations, and competitive behavior. This unprecedented movement of people is forecast to continue and intensify during the next few decades, mushrooming cities to sizes unthinkable only a century ago.