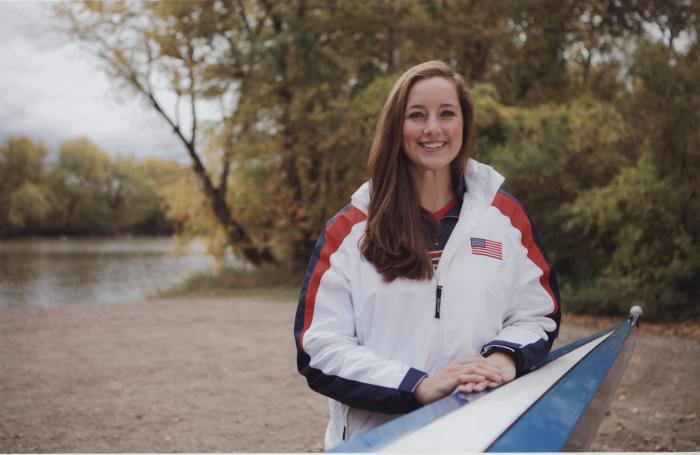 woman in a white jacket with American flag, trees and lake out of focus in the background

GVSU Rowing alum, Sarah Zelenka, represented the US in the Woman's Pair in the 2012 London Olympic Games

Sarah Zelenka (born June 8, 1987) is an American rower. She was a member of the 2012 US Summer Olympic team, having competed in the women's pair race.

Zelenka was born in Park Ridge, Illinois. She was a basketball player at Lake Park High School. She did not start rowing until her freshman year of college at Grand Valley State University. In 2008, Zelenka helped lead Grand Valley's women's eight to the American Collegiate Rowing Association national title. In the 2009 World Rowing Under-23 Championships, she finished sixth in the women's four. In the 2010 World Rowing Cup, Zelenka won golds in the women's four and eight. At the 2011 World Rowing Championships, she won gold in the women's four. With partner Sara Hendershot, Zelenka won the U.S. Olympic trials for the women's pair to qualifying for the 2012 Summer Olympics. On July 28, 2012 Zelenka made it to the Olympic finals with a time of 6:59.29. In the finals, Sarah came in fourth with a time of 7:30.39.