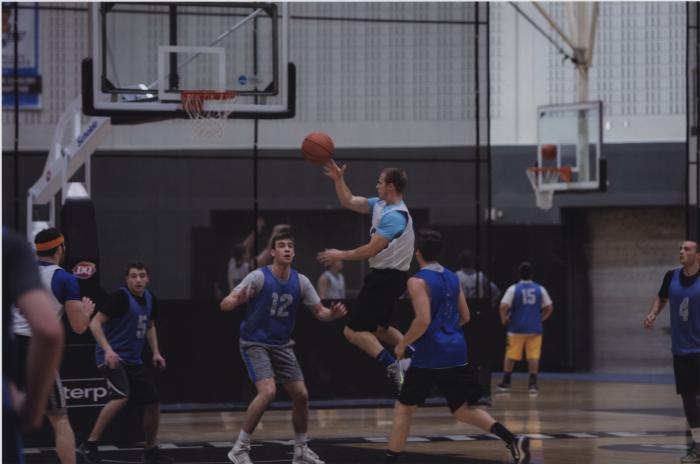 men playing games of basketball, one in a white jersey is jumping up to shoot

Basketball is a team sport played by two teams of five players on a rectangular court. The objective is to shoot a ball through a hoop 18 inches (46 cm) in diameter and mounted at a height of 10 feet (3.048 m) to backboards at each end of the court. The game was invented in 1891 by Dr. James Naismith, who would be the first basketball coach of the Kansas Jayhawks, one of the most successful programs in the game's history.

A team can score a field goal by shooting the ball through the basket being defended by the opposition team during regular play. A field goal scores three points for the shooting team if the player shoots from behind the three-point line, and two points if shot from in front of the line. A team can also score via free throws, which are worth one point, after the other team is assessed with certain fouls. The team with the most points at the end of the game wins, but additional time (overtime) is issued when the score is tied at the end of regulation. The ball can be advanced on the court by throwing it to a teammate, or by bouncing it while walking or running (dribbling). It is a violation to lift, or drag, one's pivot foot without dribbling the ball, to carry it, or to hold the ball with both hands then resume dribbling.

There are many techniques for ball-handling—shooting, passing, dribbling, and rebounding. Basketball teams generally have player positions, the tallest and strongest members of a team are called a center or power forward, while slightly shorter and more agile players are called small forward, and the shortest players or those who possess the best ball handling skills are called a point guard or shooting guard. The point guard directs the on court action of the team, implementing the coach's game plan, and managing the execution of offensive and defensive plays (player positioning).

Basketball is one of the world's most popular and widely viewed sports. The National Basketball Association (NBA) is the most popular and widely considered to be the highest level of professional basketball in the world and NBA players are the world's best paid athletes by average annual salary per player. Outside North America, the top clubs from national leagues qualify to continental championships such as the Euroleague and FIBA Americas League. The FIBA Basketball World Cup attracts the top national teams from around the world. Each continent hosts regional competitions for national teams, like EuroBasket and FIBA Americas Championship.

The history of basketball is traced back to a YMCA International Training School, known today as Springfield College, located in Springfield, Massachusetts. The sport was created by a physical education teacher named James Naismith, who in the winter of 1891 was given the task of creating a game that would keep track athletes in shape and that would prevent them from getting hurt a lot. The date of the first formal basketball game played at the Springfield YMCA Training School under Naismith's rules is generally given as December 21, 1891. Basketball began to spread to college campuses by 1893.