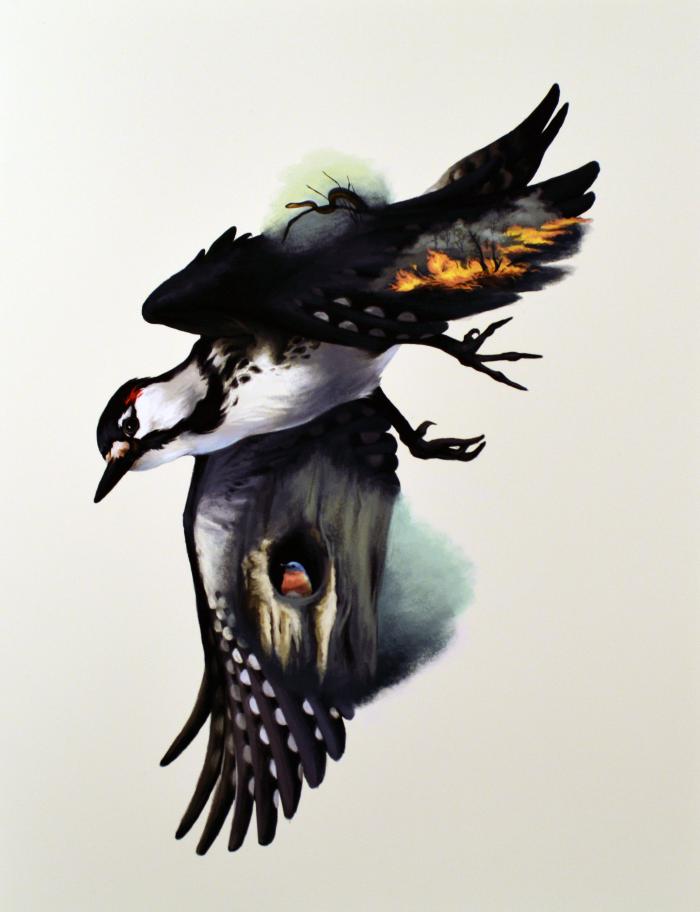 A woodpecker flies overhead. His left wing morphs into a tree stump with hole in it which rest a blue and red bird. The woodpecker's right wing has a depiction of a forest fire on it.

This work is one of five in a series on the wildlife of Great Smoky Mountains National Park. The red-cockaded woodpecker (named for the small red streak present on males' heads) is recognized as a federally threatened species, and few, if any, remain in the park. The reason is their incredibly specific habitat: living longleaf pines infected with red heart fungus, which makes them soft enough to drill cavities into. They've been adversely affected by the logging industry and fire suppression; as it turns out, these woodpeckers benefit from the occasional forest fire. Fire clears out new growth that clogs the understory of the forest and allows predators to more easily reach the woodpecker's cavity, such as arboreal snakes. Typically, red-cockaded woodpeckers create resin barriers that prevent snakes from entering cavities, but tall undergrowth can allow them to access the nests anyways. At least 27 species of vertebrates have been documented using red-cockaded woodpecker cavities, including other birds, insects, snakes, lizards, squirrels and frogs. They can even become sufficiently augmented to accommodate screech owls, ducks, and raccoons, making them a resource many species are willing to compete for.

The red-cockaded woodpecker (Leuconotopicus borealis) is a woodpecker found in southeastern North America.

The Great Smokies are part of an International Biosphere Reserve. The range is home to an estimated 187,000 acres (76,000 ha) of old growth forest, constituting the largest such stand east of the Mississippi River. The cove hardwood forests in the range's lower elevations are among the most diverse ecosystems in North America, and the Southern Appalachian spruce-fir forest that coats the range's upper elevations is the largest of its kind. The Great Smokies are also home to the densest black bear population in the Eastern United States and the most diverse salamander population outside of the tropics.

Along with the Biosphere reserve, the Great Smokies have been designated a UNESCO World Heritage Site. The U.S. National Park Service preserves and maintains 78 structures within the national park that were once part of the numerous small Appalachian communities scattered throughout the range's river valleys and coves. The park contains five historic districts and nine individual listings on the National Register of Historic Places.

The name "Smoky" comes from the natural fog that often hangs over the range and presents as large smoke plumes from a distance. This fog is caused by the vegetation exhaling volatile organic compounds, chemicals that have a high vapor pressure and easily form vapors at normal temperature and pressure.