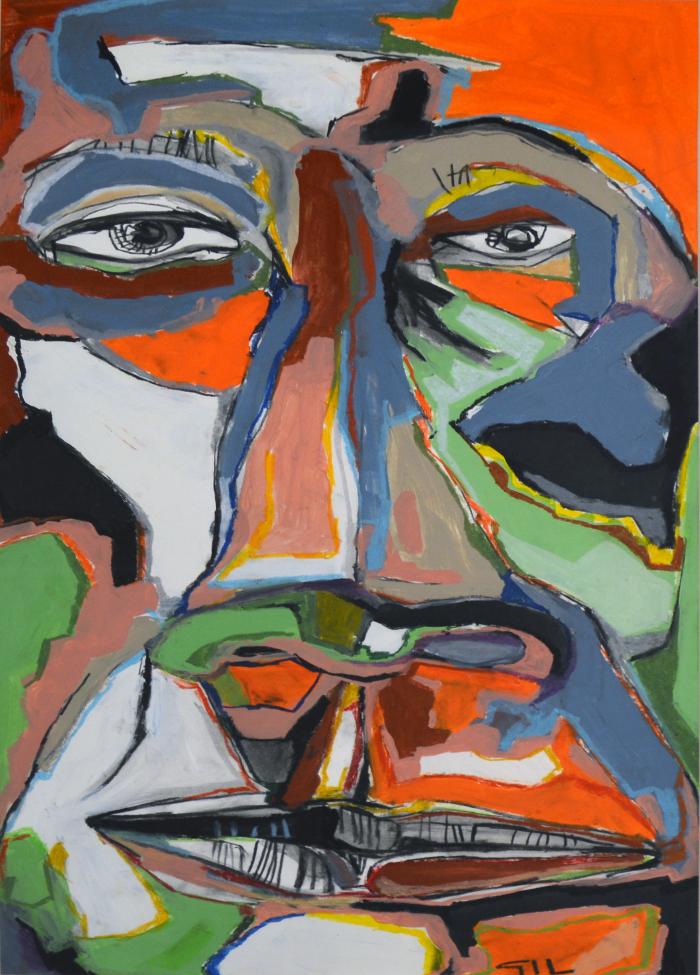 A multicolored face designed in an abstract style.

My earliest memory of practicing art stretched far back to around age six. My dad used to bring home large packages of printing paper, the paper with perforated edges that run along it's sides, for my sisters and I to draw on. Whenever we'd get bored we'd layout a stretch of paper, scribble lines upon it, color in the shapes that the lines produced, and then analyze what we saw. My older sister who I rivaled most with growing up became a huge source of my motivation. Because she could draw so well I found myself envying her talent. I began pushing myself to be better than her. Everyday I would practice drawing everything that interested me, which mostly were cartoons. I didn't start drawing from my imagination until about the 8th or 9th grade. As a child, DragonBall Z was my favorite cartoon so I'd draw the characters on cardboard, cut them out and mix them with the other characters that I was creating. Many of the characters or action figure men I created were made using twisty ties and broken pens. My parents didn't have a lot of money to afford store bought action figures, so creating my own men became both a hobby and a habit. Sometimes I'd bring in other materials for creating such as cardboard and aluminum foil, but the ones I found most pride in where the ones created using twisty ties and pipe cleaners. These action figures or "men" as I refer to them opened a new artistic outlet for me and all I wanted to do was constantly engulf myself in art. Art shows were a mainstay and it was ritual for me to always have a sketchbook stuck in hand. I become known in the family as the creative or artistic one and for Christmas and Birthdays all I would receive were art supplies. People were always introducing me to new forms of art and artists. As time moved on, I developed an appreciation for character designing, illustration and comic books, thus fueling my interest in the multimedia side of art. After high school, I knew I wanted to attend college but I was unsure of where I wanted to go or what I wanted to study. With computers a growing phenomenon in our culture, I knew something in computers would guarantee some type of career. I found success when I received an Associate's in Multimedia but still I wasn't satisfied, I wanted so much more. I tried game design and lasted in the program for three semesters before deciding that this too wasn't the path for me, I wanted to get back to fine arts. School was only half of the cause for my straying focus from fine arts. Music was another avenue of interest for me. After being introduced to rap and poetry in junior high, I realized that I had a knack for this art form. But still more and more I wanted to return to the art. I decided to move to Chicago and attend the Illinois Institute of Art Chicago. Here I found my place of belonging, those I could inspire and be inspired by surrounded me. I left everything behind to follow this dream to Chicago. But after experiencing financial hardship, my journey was short lived. With the lack of space to work outside of the school environment I was pressured to work on music. Everyday I woke up, I knew all I wanted to do was art. Another opportunity to move presented itself and I decided to seize it. I decided to move to Grand Rapids with my girlfriend. For two months, I was able to work from home on my art and I produced a couple of satisfactory pieces that I was very appreciative of. Out on a casual walk one day, I stumbled upon Heartside, immediately I was hooked. In just two months, I was able to produce more satisfactory pieces then I had in a long time. Through Heartside, I was able to connect and be connected with other art galleries and art opportunities for exposing my art. Now approaching four months, I am comfortable in a signature style, among many styles I've tried and created and working toward a long awaited dream fulfilled.