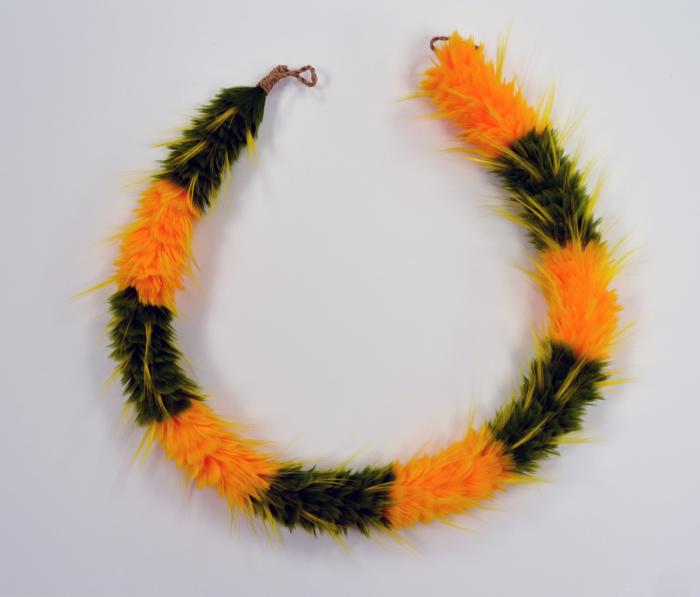 A Hawaiian feather lei made from alternating yellow and green feathers.

Feather lei made by students taught by two masters of Hawaiian featherwork, the late Aunty Mary Lou Kaleonahenahe Kekuewa and her daughter, the late Paulette Nohealani Kahalepuna of Oahu.

Featherwork is the working of feathers into a work of art or cultural artifact. This was especially elaborate among the peoples of Oceania and the Americas, such as the Incas and Aztecs.

Feathered cloaks and headdresses include the ʻahuʻula capes and mahiole helmets were worn by Hawaiian royalty; many are now on display at the Bishop Museum, and other museums across the world. Kāhili are a type of feathered standard, another symbol of royalty. The introduction of foreign species, overhunting, and environment changes drove birds with desirable feathers, such as the ‘ō‘ō and mamo, to extinction, though the sacred scarlet honeycreeper survived despite its popularity.

Mexican feather work was a Pre-Columbian art form which was continued after the Conquest of Mexico, originally organized by the Spanish missionaries into a luxury export trade, sending objects back to Europe. Immediately after the conquest existing objects such as Montezuma's headdress, now in Vienna, were admired in the courts of Europe.

Although featherwork is primarily used for clothing, headdresses, ceremonial shields, and tapestries, the Pomo peoples of California are famous for the minute featherwork of their grass baskets, many of which are on display at the National Museum of the American Indian in Washington.

The Maori of New Zealand used featherwork to construct cloaks for clothing and to decorate kete (bags) and weapons.