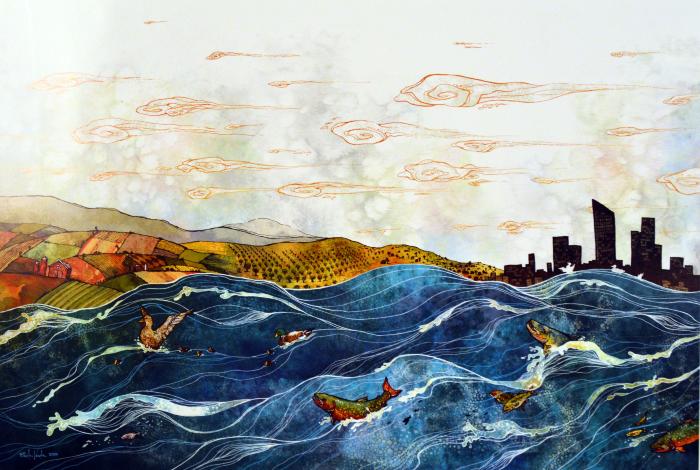 Fish swimming on the surface of a river with a city and colorful fields depicted on the riverbank.

"I once heard artists described as mirrors of the world whose work allows a person to become aware of any given 'reflection'. Instead of showing people what's already around them, though, I'd rather create illustrations that are more like Alice's Looking Glass: mirrors that can reflect reality but ultimately act as portals for the imagination. I believe that childhood is a critical stage where that very imagination is either cultivated or neglected, and I want to be the one to offer it endless nutrition with my illustrations. Throughout my own childhood I had a multitude of illustrated books that fed my creative soul by giving me access to exciting worlds. Though these worlds were fantastical, they had a hint of reality and thus encouraged me to believe nothing was implausible in my own world. As a result, I personally believe that even the seemingly impossible can one day become achievable if there is a willing and passionate imagination as a driving force." -BreeAnn Veenstra