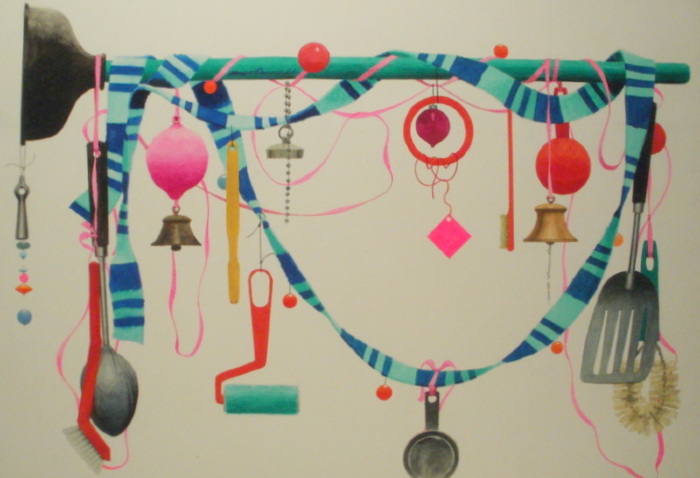 An assortment of household items, including a spatula, bells, brushes, and Christmas ornaments, hang off the handle of a toilet plunger.

Mike McDonnell was born in Muskegon, Michigan in 1937. From 1956 to 1958 he studied with W.H. Mosby in the American Academy of Art in Chicago. He continued studying from 1958 to 1960 with Sidney E. Dickinson in the Art Students League of New York. In 1959 he also completed a year of study in the National Academy of Fine Arts in New York with Robert Phillip and Dean Cornwell. He received additional training in portraiture, initially in oil. He maintained an interest in portraiture throughout his life, but he created primarily still lifes and interiors during his last forty years. In those compositions he strived to idealize common objects while he emphasized clean, precise color and details. This watercolor was done after Mike began having much more fun than he had had previously. He lightened up; he became interest in bright cheerful colors and he began to tap into his sense of humor.